The TSL262 sensor has been popular with a number of micromouse builders. It is compact, easy to use and results in a low component count. A common alternative is the use of a simple phototransistor in an emitter foloower configuration. So, why change what works…

Well, the lighting conditions at the 2011 All Japan Micromouse contest were pretty brutal. Not only was it very bright, it was also remarkably variable with strong shadows. You may be able to get an indication from this photo: 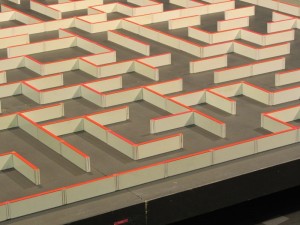 My own mouse simply could not cope. In spite of the sensors being protected from ambient by a layer of PCB above and matt black paint on the surrounding areas, the problem seemed to be that the walls wer so strongly lit that there was just not enough headroom for the detectors to get a decent reading. When the ambient light puts the DC value of the detector high enough, any difference caused by the emitters is smaller than it would otherwise be. In the extreme, no difference could be seen.

I resolved to replace the TSL262 with something more robust. The emitter-follower phototransistor arrangement is very common. in Japan, many contestants use aTPS601 phototransistor as the sensing element. It is o common, I have to wonder whether it possesses some magic characteristic that makes it particularly suitable to the task or whether most users simply go with a proven design.

Either way, it does not matter to me as that particular device is not obtainable in the UK.

I looked at a range of phototransistors that I could buy:

The risetime and sensitivity parameters have been scaled for an emitter resistance of 1kOhm and an irradiance of 1mW/cm^2. All assuming the device is linear in its response. On the basis that all the published schematics I have seen using the TPS601 have an emitter resistor of 1kOhm, and a supply of 5V, I assume that the ambient irradiance is not likely to exceed about 1mW/m^2 and that the active response should not exceed about 1.5mW/cm^2. In use, the sensor is read twice. Once ‘dark’ with only the ambient illumination and once ‘lit’ with the emitter turned on. the active response is the difference between the lit and the dark values. So that equates to the sensor giving a dark response of no more than about 2V and a lit response of up to 5 V. In a room with very low levels of ambient lighting, the sensor at minimum distance would need to produce an active response of no more than 3V. That is an ADC count of around 600 with a 5V supply and 10 bits conversion accuracy.

Since the TPS601 was unavailable, I experimented with what looked like the next best two that I had to hand – the SFH309FA-5 and the BPW85C. these were set up in a number of different physical configurations along with a TSL262 for comparison. 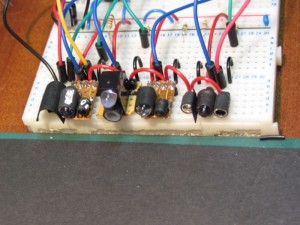 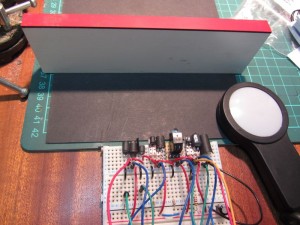 A light meter measured the ambient light from an overhead tungsten filament floodlight. Notice that the TSL262 needed a black paper hood to shield it from ambient. The other examples used a variety of methods to shade the detector.

A few experiments revealed that the BPW85C gave best results with a load resistor of 470 Ohms and the SFH309FA gave similar results for a load resistor of 1 kOhm. The emitter LED in all cases was an SFH4550. I am a little surprised that they differed so much in their load resistor requirements and tht the load resistors were so high. That probably says more about my estimating skills and understanding of phototransistors than it does about the devices themselves.

This is a tricky experiment to do reliably and I didn’t ry that hard. In particular, at short ranges there are issues about the separation of emitter and detector. There is significant change resulting from the orientation of the detector to the surface

Nonetheless, the important result was in the effect of high ambient light levels. The sensor was set up at a distance of 100mm. With overhead illumination measured at about 3000 lux, all sensors behaved fairly well. there was some change in the active results. As the illumination level increased to 3500 lux and beyond however, the TSL262 started to give up and was completely unusable at 4500 lux. The situation got worse with the light directed onto the maze wall rather than from directly overhead. The other sensors carried on giving pretty consistent results all the way to 6500 lux.

At only 30mm range, the TSL262 actually started to give larger readings with ambient illumination as low as 2000 lux.

All in all, not a good performance for the TSL262.

Either of the other detectors however would be much better. More extensive testing indicated that, in spite of not being IR filtered, the BPW85C might have better linearity than the SFH309FA.

In a few days, when they arrive, I will test a couple of other devices. In particular, the TEFT4300 and the RPM012PB

6 thoughts on “Sensor Alternatives to the TSL262”