Analog Devices recently release new vibration rejection gyros which seemed a perfect fit for use on a micromouse. Since I was using the ADXRS610 on Zeetah V, I temporarily mounted an ADXRS642 to ZV to compare the two. 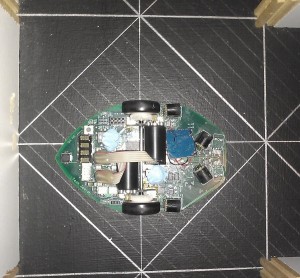 ZV was only designed for one gyro, so we took a spare Zeetah VI board, attached the ADXRS642 gyro and associated components and then cut down the ZVI board so that it would fit on a spot on the ZV board. The cut down gyro board was then attached to an unused ADC channel on ZV. 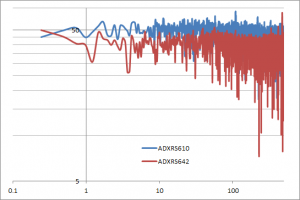 This graph shows the data for both gyros when the mouse was stationary.

Next, a 750 deg/second step was applied and again the output of both gyros was recorded. 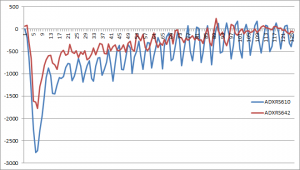 The graph on the left shows the derivative of the gyro’s output i.e. the rotational acceleration. Again, the ADXRS642 gryo has lower noise than the ADXRS610 gyro.

While the noise of the ADXRS642 is lower it turns out that its range cannot be extended to the same extent as the ADXRS610. The max. rotational velocity the ADXRS642 could measure before the output would saturate was approx. 750 deg/sec.