The UKMATTS Micromouse competition took place on November 4th at Hazlemere near High Wycombe in Buckinghamshire.

The event was organised and run by Duncan Louttit. The maze and line following track were kindly lent to us by Birmingham City University. The timing gear was provided by David Hannaford, Ian Butterworth and Duncan Louttit. For the first time in the drag race event, competitors’ reaction times were logged. Another first in the senior competition was “ratification” where the mice were weighed and measured as they were registered by the entrants.

A total of 18 entries were registered for the senior events. Six mice, each capable of competing in three different events were entered for the junior competition.

The maze this year was unusually interesting with many possible routes to the centre – all of similar length and complexity. Mice had ample opportunity to make strategic decisions and select a route that souted their individual strengths. 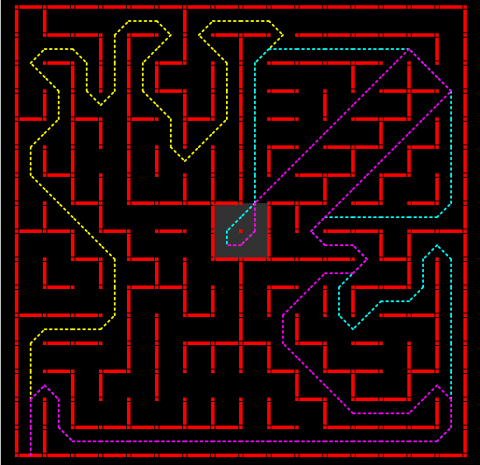 Unfortunately for my new suction-fan assisted mouse, D5A, the ‘best’ route included a significant gap between the floor sections in the middle of the last 135 degree turn on the magenta route. D5A failed to navigate that at any but its lowest speed setting and crashed a couple of times. The last crash was bad enough to shatter one wheel along with any illusion I might have that the mouse was contest ready. All the crashing and messing about meant that time and touch penalties took their toll and the winner was Derek Hall with Mouse X. I believe Mouse X is now about 46 years old (in mouse years) but it still puts on a good show. D5A did get in one speed run at a setting below what I would consider its minimum contest run speed. even so, it managed the route in 5.2 seconds. At top speed, I estimate it may have been able to get that down to less than 4 seconds. But, as we all know, talk is cheap.

Four mice battled it out in this event. Three runs were permitted allowing “intelligent” mice to learn the course to run slowly in sharp corners and then speed up in the straights.

There were just two entries in this category so no time trials or heats were necessary. It is worth noting that reaction time to the countdown start was more than 25% of the winner’s run time. [Note that an actual run time of around 1.5 seconds over 6m is VERY fast – do the maths and be surprised!]

This event was conducted as a knockout competition with mice seeded according to their performance in a time trial. The fastest run time recorded was 3.155 s in the semi final by the eventual winner. The best reaction time was 0.232s by the 4th placed mouse.