The UK micromouse competition for 2008 was run on June 28th at Millennium Point in Birmingham. We had an excellent turnout and a truly International flavour with teams from Iran, India, Singapore and Holland as well as the UK teams. As well as the micromouse contest there was also mini-sumo, ant-weight robot wars, Formula1 and Formula 4 schools competitions, biped robots and a number of other displays.

Perhaps the most exciting of the schools competitions in the outer area was the Formula 1 drag race. For this competition, robots race against each other and the clock along a straight 7m track. Following a broad white line down the middle of the track, the race is a test of raw power and control. Severe penalties are awarded to robots that overrun the braking area at the end or which make contact with the sides of the track. This competition saw a very good number of entries from St Joseph’s Institution in Singapore. The students from this school all ran essentially the same hardware with minor variations in things like tyres. the se robots are actually designed to run a line-following contest around a closed track. Most remarkable of all is that they are driven by stepper motors and achieve a very good performance. The winners managed times of about 2.1 seconds. Times like that imply accelerations in the order of 3m/s/s and top speeds of about 4.5m/s. This is not at all bad for stepper driven vehicles. I think it should be possible to run the course in 1.7 seconds and 1.5 seconds might be something of a limit (drag race calculations).

The micromouse competition had a senior and a junior section. The junior section had a number of entries from Woodlands Ring Secondary School using the MIGS and MKITC mice. These mice have pre-built hardware and come with libraries for driving the motors, sensors and so-on. Stunts can either determine the running parameters for speeds and searching (MIGS) or write C code using the supplied libraries (MKITC). Both types of mice proved to be remarkably capable and gave excellent performances. In fact, I would be nervous about pitting my own most recent stepper mouse against the best of them. A couple of UK newcomers also entered the junior section of the contest.

For the seniors, there was a good spread of entries including some from India and Iran. the Iranian mouse was particularly impressive as it had been completed as part of an undergraduate project. Normally this is more than can be achieved in the available time. Derek Hall ran MouseX and its successor MouseXXX. I ran my new DC mouse Decimus.

It is all over except for the sulking now. This is my eighth UK competition. Each year my mouse does a bit better but still the title eludes me. For the first time however, I am confidant that I can run the mouse as fast as the current UK champion, Derek Hall. The morning heats were a tense time with Decimus having its first competition outing. Decimus did not really put a foot wrong and did everything I had expected of it. Most significantly, it got a best run time of 6.41 seconds – exactly the same as Derek’s MouseX. However, Decimus searches quite slowly – much more slowly that MouseX and so the aggregate score for that run was significantly worse. For the finals, I had tweaked things up a little. Mostly, I eliminated a couple for the slower speed runs and speeded up the return from the centre to the start to try and reduce the search time penalty. Derek also did some tweaking but I am not sure what that entailed. Then came the final runs. Decimus found the centre quite quickly, solved the maze very quickly and dutifully returned to the start for a speed run. At that point it crashed and I had to pick it up, incurring a touch penalty. After a restart it promptly set of on a null run. That is, for some reason, the path planner did not generate a path and the mouse just spun on the spot without leaving the start square. A quick check of the map and it seemed OK but would not generate a path. The entire process was repeated with the same result. On the third try, Decimus managed to explore a bit further and did a run. By then, the 6 minute run time was running out and the tyres were pretty dusty. Although I got a reasonably good run time, Decimus had no chance of a decent score and did not manage to complete any but the slowest of its speed runs.

All this was pretty disappointing but there was a bit of happy ending. Placing third in the competition meant that I did not get a shiny cheese trophy but I did get a chance to dip into the box of sponsor prizes. What luck! In the box was an IAR KickStart kit for the STM32 ARM Cortex M3, generously provided by Chris Hills of PhaedruS Systems. I would have laboured all day just for that! 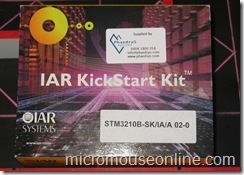 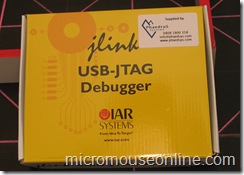 The kit contains a development board and the IAR jlink USB-JTAG debugger. Since my next mouse will be based on the STM32, this is ideal and very timely as development will need to start straight away.

You can see pictures from the event on my Picasa gallery

Results will be posted to MicromouseOnline as soon as they are available.