After a break of a month, we’ve started working on Zeetah V again.

I have started work on ZV again in preparation for APEC 2011 in March in Ft Worth, TX. The goals for that contest are to do speed runs with diagonals.
My friend, Pierre, who made all the mechanical parts for ZV, has been coming up with ways to make ZV more competitive.
After he took a look at the pictures from the All Japan Contest, he decided that we should replace the Al hubs and spur g 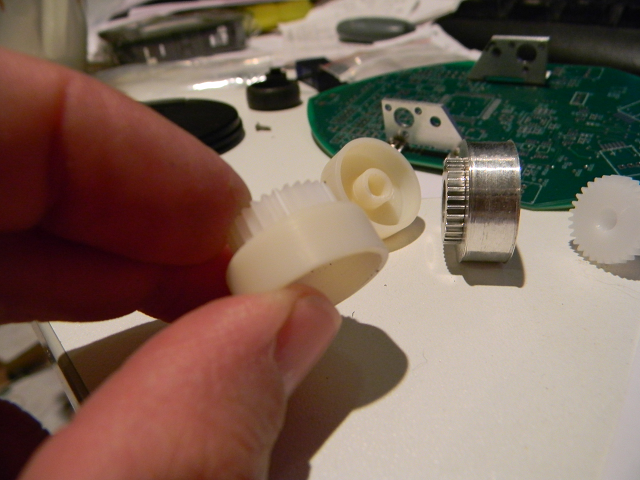 ear on ZV with plastic ones.
Currently, each Al hub, spur gear and bearing set weigh 6.4g. The replacement using plastic pieces and new bearings will be either 2.0g or 2.3g. This change will reduce the mouse weight by 8g (8%) but more importantly reduce the rotational inertia by around 11%.
There are two different hub styles he is considering – see image below. The one in his hand is the lighter one but he is concerned about it wobbling because the two bearings to support the hub are very close to each other. There is another plastic hub which has a cylinder shape coming out of the center which should have less wobble. 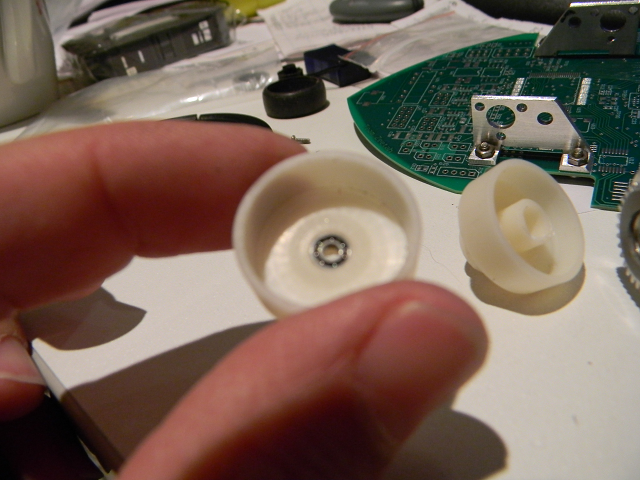 Another option Pierre is considering is making the hub and gear out of one piece. I believe Peter does this. I’m concerned about the meshing and also the strength of the teeth but we will experiment and find out.

We are also going to reduce the diameter of the hub by 1mm this is because I was too conservative and the current clearance between the PCB and the maze floor is too much. I think we are still being too conservative but don’t want to push things right now. This change should reduce the lateral and longitudinal weight transfer by 1% each. Is this change  significant? Not at the performance level the mouse is currently at but I’ll take every little bit of help.