Having seen quite a lot of variability in the output from the encoders on my micromouse, I got to wondering how much backlash there really is in the gear train. Finally, I figured the easiest way to measure it would be to send the motors back and forward alternately while holding the wheels still and record the total amount of movement directly from the encoders…

This was done at a couple of different, modest levels of PWM. Too high a PWM value would distort the results and run the risk of damaging either the motor or the pinion. For the experiment I chose 3% and 12% PWM. The motor had the direction reversed every 50ms since I believe this was much larger then the time constant of the motor armature. 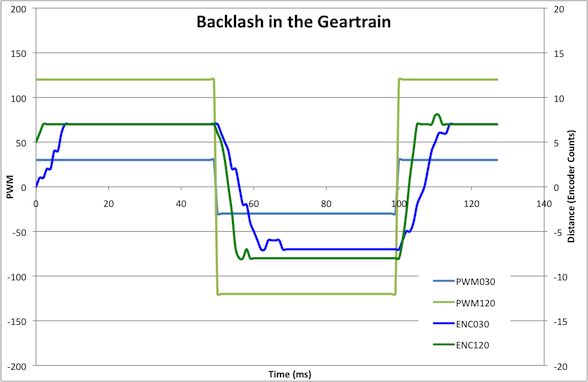 The good news is that the results for both PWM levels are reasonably consistent. The period was long enough for the pinion to be held firmly against the drive gear. Total backlash seems to be about 16 encoder counts which is around 0.3mm on the ground for this mouse.

Also it seems like, if I wanted to have the mouse take up backlash before starting a move, I would only need to apply 3% PWM for 10ms or so to be reasonably sure it as all taken care of. That would help stop the controller from seeing large errors at the start of a move but it is not clear there is any real benefit overall.