The All Japan Micromouse Contest, 2017 was held on November 18th and 19th at the Shibaura Institute of Technology, Tokyo. With even more entries that ever before, it was sure to be a busy weekend.

After the horrors of not performing well at the Taiwan contest in September, I was very keen to make amends in Japan. My target this year was a top three place. The competition level is extremely high and it seemed a bit ambitious to think I could do much better than third place. Still, the bugs that caused failure in Taiwan were sorted out so that was good.

Less good was the damage done at the UK November event 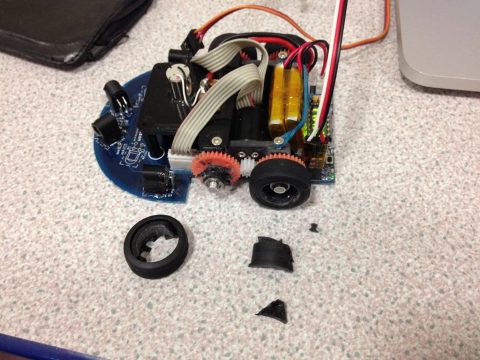 So – instead of having two weeks to tune and adjust everything, I had to spend several days making new drive trains with replacement motor mounts, and wheels. 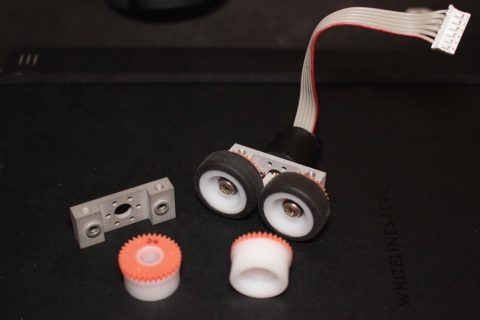 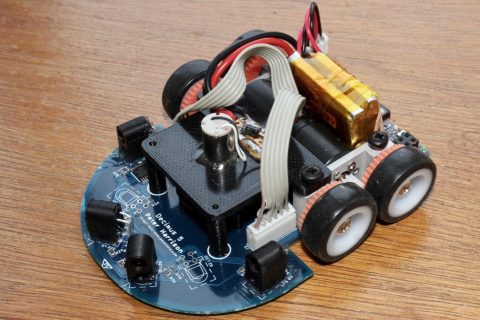 All shiny new parts, including the tyres. Since the wheel spacing is different and the gear ratio has changed, that left me with only a couple of days to try and update the controller parameters and re-test all the turns. Now they were back to basics and not properly tested. Nothing for it though – everything was booked. I just had to take, and run, what I had.

Friday is practice day and the first opportunity to get the sensor calibration done as well as see how the mouse would run on the Japan maze surface. There was a chance to test out the turns and things seemed largely OK until I noticed that one of the new wheels was not properly screwed down and kept coming loose. I also noticed that this wheel was not completely parallel with the others. That explained why I was getting different behaviour between the left and right versions of some turns.

With the wheel properly mounted, it was soon clear that the turn behaviour was different. The SD45 turn, in particular was very different than what I had set up before. It is possible that I had parameters from before the rebuild but the large change was worrying. Not quite believing what I saw, I was reluctant to make the full adjustment suggested by the tests. These changes also called into question all the other turn settings and the worry and doubt was beginning to build.

In the end, I was running the small test maze at full speed but I had little confidence with performance in the contest because I knew the mouse was not set up right.

Overnight, I decided to compromise on the turn adjustment settings for 45 degree turn and add in half the adjustment the tests suggested. D5A had run without that but it did not look too reliable. By now, I was reasonably sure it was not going to be a good event this year but you just never know.

The qualifier maze was very open and gave mice every possible opportunity to fail: 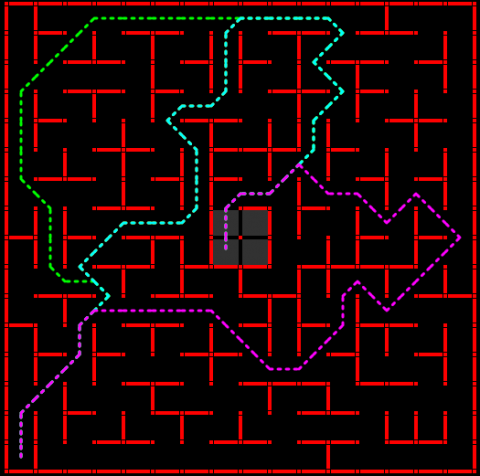 There was huge choice in routes available with many turns, most of which had few good alignment references. By the time I got to run I was very nervous. My hands shook so much that pressing the buttons was a little tricky and my heart was racing. After all, if you go out at this stage, thousands of miles of travel have simply brought you here as a spectator. (It turns out that when you watch the other contestants – even very good runners with experience – many of them are in a similar state).

D5A ended up taking none of the routes predicted by my maze editor. That predicted the magenta route. The other routes are the smallest number of cells (cyan) and a flood method that tries to avoid turns (green). Although the magenta route is not the lowest cell count, it is the shortest at 6.22m. Luckily, the actual mouse has a smarter search in it and managed to find the least costly route to be this one (grey cells are the ones visited during the search): 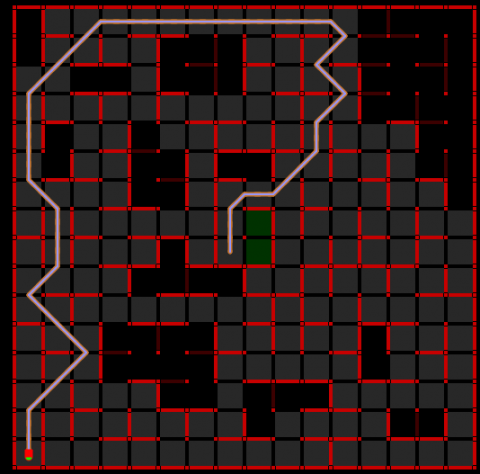 To my great surprise, D5A did really well and, by the end of the qualifiers, had achieved the best run time of all! 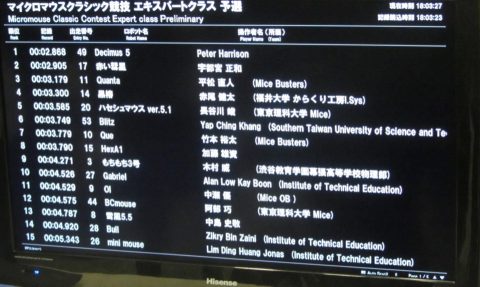 Being number one in the qualifiers was fantastic. I meant that I would be the last to run in the finals and so I would know exactly how fast I had to run to get to first place.

After the run, I was shown a video of D5A bouncing off the walls in a very worrying manner. It recovered and got the time but I noted that the source of the problem was the 45 degree turns that I had been worried about before.

After the qualifiers, the temptation to change parameters and settings can be huge. You hope to improve perceived problems but it is also possible to really mess things up. I knew there was a problem with some of the turns but there was simply not enough quality time on a practice maze to recalibrate. In the end I decided to just leave it alone. Better to have a mouse that runs acceptably well than to risk a mouse that is unknown in its performance.

There is a lot going on through finals day and the mouse is sequestered early on so you simply have to just hope for the best and enjoy the contest as best you can. There were some great performances in all the events so it is always worth watching.

When I saw the contest maze, I confess I was a little dismayed. It looked particularly dangerous and I gradually became convinced my mouse simply would not be able to get around at speed. Why? because it was stuffed with those 45 degree turns that I knew to be a problem. How I wished I had found an opportunity to get them set up properly. 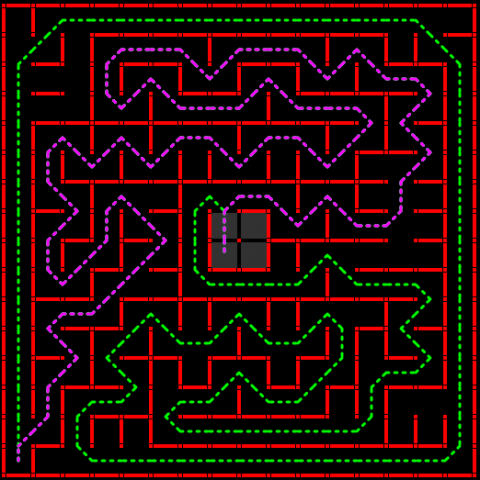 While the paths were complex, the routes were simple to find. There would be no searching around trying to fill in missing bits of the maze. The green route, at 19.4m, was much longer than the magenta one at 13.9m. It seemed very unlikely that any mouse would take the long route unless it had exceptional speed down a straight.

By the time we had got to the last five to run, the fastest time had been set by Que at 9.338 seconds. That was reduced to 8.306 seconds by the time Utsonomiya-san was ready to run with Red Comet. He had placed second in the qualifier so there was only him and me left to run. I had become less nervous while sitting there watching all these mice run. My calmness was less about confidence and more about the growing conviction that I would simply crash out so there was no point in getting over excited. My prediction at the start was that the best time would be close to 8 seconds and we were nearly there already.

Red Comet did its search and then made its first fast run. At 7.930 seconds, it was not only enough to place him first but the big surprise was that he took the long route all the way round the outside of the maze. He had also gone below 8 seconds straight away and everyone was very impressed – not least me. That was fast! His seconds speedrun was impressively faster, taking three quarters of a second off his time to get down to 7.284 seconds. He still had two speedruns left and, at this stage was assured of at least second place even if I teleported to the goal. Unfortunately, he was unable to run any faster and crashed out on both his next runs.

I set down D5A for its runs pretty sure that I was just going through the motions. The search was fine – a fast in and out with almost no wasted motion. I search pretty quickly but there was at least one mouse that searched with the fan on and was way quicker than me. I will have to work on that. My first fast run was a success, taking the shorter of the two routes like pretty well everyone, with a time of 8.504 seconds. That put me in fourth place and surprised me greatly. Feeling much better, I started the second speedrun at the next setting and was even more surprised to get a run time of 7.415 seconds. That is a huge improvement that put me into seconds place. It was still possible to win! Then I made a tactical error and allowed the mouse to try too fast a run. The very thing I see so many mice do. I only needed to make up 132milliseconds to take first place but I overcooked it and crashed. And then crashed again. Predictably, both crashes were, once more, on the 45 degree turns.

So – second place! Hugely pleased but a tiny part of me was sure that, with more setup time and a little more thought for tactics, I could have taken first. No point in that kind of speculation though. I did very well and was quite happy to take home second place. Besides, Red Comet crashed out twice as well and he too probably had plenty of improvement left. With a bit of luck we will get a re-match in San Antonio at the APEC contest next spring. 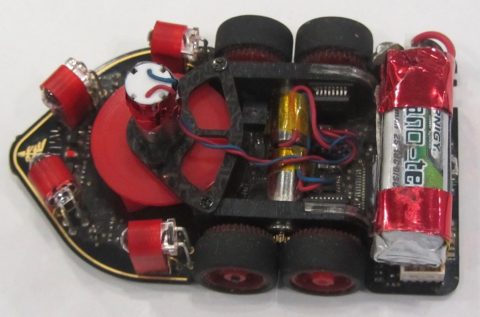 Juing-Huei Su took great video of the runs and put them up on Youtube:

The run times for the last 20 or so mice to run were: 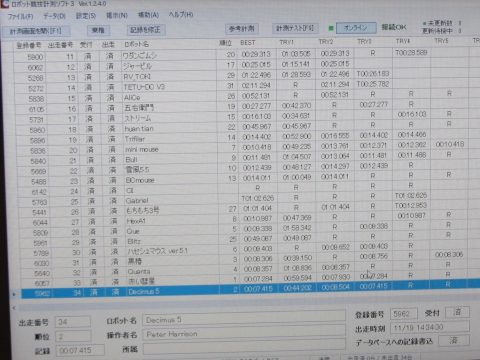 None of this would be possible without the hard work and commitment of the New Technology Foundation in Japan. They are all volunteers and put together the most excellent contest each year. I very much look forward to the opportunity to try for first place  next year.

You can visit the NTF web site for full details of all the events, contestants and results. They are available in Japanese and English. Check the links on the top left of the page. You will also find plenty of historical contest information.