As usual, on the Sunday after the Minos presentations, we hold a semi-formal micromouse contest as a bit of a taster for the upcoming UK summer contest. All the usual suspects were present but for some, this was a difficult year.

I have probably not been to a micromouse contest where there has not been some fuss over the walls. This year, however, the Royal holloway maze seemed particularly challenging. Although the common Korean walls were used, they seem to have come from several different batches and everyone notices the apparently large variations in reflectivity. While this was apparent at visible wavelengths, I can only suppose it was worse at IR wavelengths. there was much shaking of heads and crashing of mice. Here is a picture of part of the maze illustrating some of the problem: 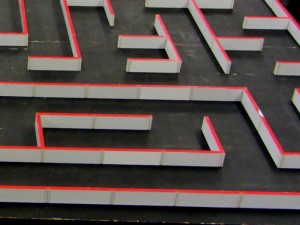 By the time we got to the finals stage, pretty well nobody had any idea what was going to happen. the maze had two main alternative routes with a number of minor variations possible. Generally mice took the slightly shorter but more twisty route shown on the left. Here is the maze that was used: 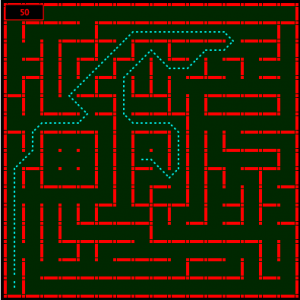 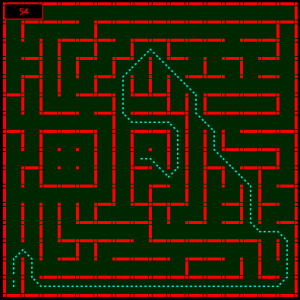 All in all, it is fair to say that many mice failed to give of their best. Not all though. Since we had no automatic timing mechanism this year and were also lacking anything to automatically calculate search time penalties, we adopted Japan Rules. That is, each mouse was allowed five runs or five minutes – whichever finished first. Touch penalties were not used and a simple fastest run time was the recorded criterion. Here are the results:

As you can see, not terribly impressive. Except for Tim Foden’s FatCat. His was the only mouse that actually managed to perform a speed run and clocked up a perfectly respectable 11.6 seconds.

The wall followers had rather better luck. At least none of them failed to find the middle:

Generally, problems with the maze and/or the lighting are something that the mouse builder must deal with but this, I think, may have been a challenge too great for meaningful competition.