After a shaky start, Decimus 2 wins the day in Birmingham at the 2010 UK micromouse contest. After all the hours of preparation and lost sleep, the time had come for the new mouse to prove itself. Decimus 1 (D1) was a relatively know quantity in that it had won two of the last three contests agains the MouseX and MouseX2 mice from Derek Hall and Jim Chidley. However, it had a disturbing tendency to crash and needed more than a bit of luck to keep going in the maze. I had some pretty good ideas as to why but decided to leave the mouse alone and concentrate on its successor, Decimus 2 (D2).

A lot of time went into ‘improving’ various parts of D2. Unfortunately a good number of them turned out to make things worse and had to be undone. Thank goodness for version control software!

The two changes that were most important, which stayed in and made quite a difference was an improved motor control algorithm and better detection of wall edges to compensate for forward position errors. Attempts to improve the steering and get reliable forward error compensation along diagonals seemed doomed to failure and were abandoned. They are now high on my list of future changes. Having two very similar mice is enormously comforting. It gives you the opportunity to retain a known-good (or fairly good) version while experimenting on the alternative. I am tempted to build mice in pairs in the future. Expensive option though!

On the morning of the contest, I arrived nice and early and concentrated on possibly the most important part of the preparation – setting up the sensors for the local maze walls. this is a recurring and annoying task which I would really like to find a way to avoid. However, for now it is vital. A big snag when doing this is the variability of the walls even in the same maze. It is important to try and find an ‘average’ set of walls. My first attempts gave me a lot of trouble because it seems that I picked a cluster of particularly non-reflective walls along one straight and it took me a while to realise the problem.

Soon enough, we were running in the qualifiers. Apart from the usual suspects, we were treated to performances from some stepper mice brought over by St Joseph’s institute in Singapore. these can perform remarkably well. Many builders dismiss stepper mice as not worth the effort but that is a big mistake. A stepper mouse is cheap to build, can achieve surprising performance and teaches you a lot about mouse building. Everyone should try one.

This is the qualifying maze with the route taken by D1 and D2: 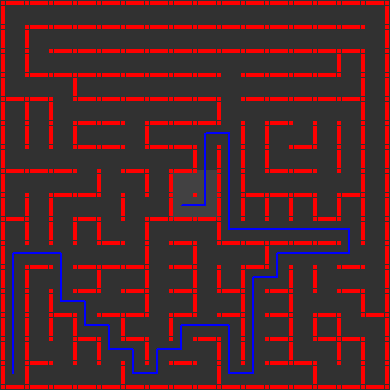 Mice were given an interesting choice between long straights and scary diagonals. the straights path was significantly longer however so, for my mice, the choice was clear – brave the diagonals. D2 struggled to complete this at speed because of the section in the lower right quadrant. A 180 degree turn finds the mouse running up a section with a wall on one side and a comb on the other. Because the turn was poorly adjusted, the mouse only did about 170 degrees and promptly drove into the comb before it could get a good correction. I know why this is but fixing it will have to wait for another day and I just had to hope that this section was not present in the final. Even so, at lunchtime, I adjusted the turn so that any error would send the mouse toward the wall and away from the comb. Other than that, D2 was behaving reasonably well and D1 was up to its usual unreliable tricks. Both mice got a time but neither was impressive, leaving them some way down the field at the end of qualifying.

After a few fixes at lunchtime, the finals were soon upon us. The maze, designed by Ken Hewitt, had some changes but followed the same overall philosophy: 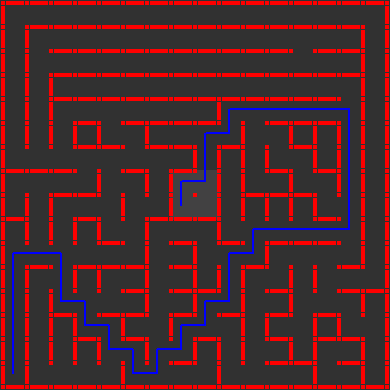 Luckily for me, the 180 followed by a comb was gone. For the life of me I cannot remember whether D2 took the final diagonal or not. D1, predictably, had some trouble getting a good time but did, at at least, manage a best run time of 8.44 seconds. With the touch and search time penalties added, that left it with a score of 21.31. Not too good. Everything rested on the performance of D2 now.

thankfully, D2 behaved extremely well. It managed a fast run of 7.57 seconds on its first attempt. A slow search speed resulted in a score for that run of 11.37 seconds. the UK rules make it almost impossible to improve on your first fast run so that was the best final score for D2. However, subsequent speed runs gave is a fastest run time of 6.89 seconds. Not too shabby. To be competitive in South East Asia, I would need to get that down to less than 5 seconds on this maze but the mouse should be capable. Whether I am remains to be seen.

This year, fortune was on my side as Derek’s mouse favoured the long straights. It ran them very quickly but the distance was just too great and his best score time was 14.31 and his fastest run time, achieved a couple of runs later was 10.58 seconds. Victory was mine for the second year running! I like to think I was calm and gracious on the outside but, to be honest, I was moderately smug on the inside. 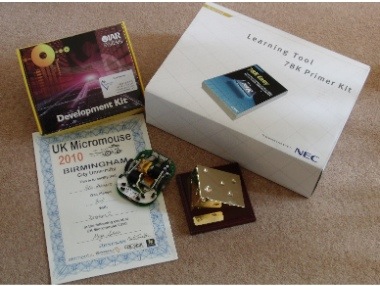 As a footnote, Derek ran a six-wheel mouse called FAB ONE, in the time trials: 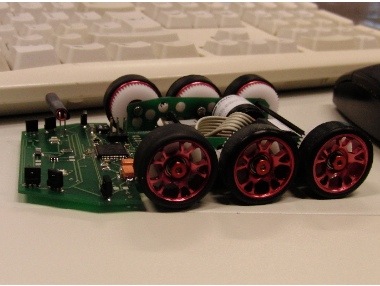 This is an obvious and logical extension to the four wheel design of Kato-san and others. The primary advantage being that, at any conceivable acceleration or deceleration, the mouse will always be sitting on some driving wheels. Also, it is balanced such that the center pair of wheels, which are about 0.5mm lower than the front and rear pairs, take pretty much all the weight at rest. While still in an early stage of development, it is very quick. VERY quick indeed. If he can get it to go round corners reliably, it spells the end for the Decimus range.

Now, should I work on a four wheel or a six wheel mouse…