Arguably the most important turn that a micromouse can perform is the search turn. That is, a simple 90 degree turn performed while the mouse is still searching the maze. While searching, the mouse generally has no idea what is waiting around the next corner. A decision has to be made on the fly as to what to do next. That means that the turn has to be much tighter than it will be during a speed run. Also, there is unlikely to be much information to allow the mouse to correct its position. This evening I finished implementing a new turn for Decimus 2B.

This turn starts 70mm from the centre of the cell. I would like to start a bit later really but there is already a possibility that the inside wheels will stop moving because of the way I have implemented the turn. A key feature of any turn is that it be reliable. That is, every time you run it, you get the same result. That is not as easy as it might seem. To test this turn, I set the mouse to performing a sequence of 78 consecutive search turns in my small practice maze. The sequence was run at a constant speed of 500mm/s which is what I aim to run the search at. A subsequent test that was not filmed managed the same result at 600mm/s so there is a bit of margin for error and possible improvement.  The entire sequence is performed by dead reckoning. There is no steering or edge correction done from any of the walls. If it gets the turn right, the path should end at the centre of the top right cell. No cheating. Watch it all and see if it makes the goal.

In response to a question, here is a diagram showing what I mean by the entry and exit offset. 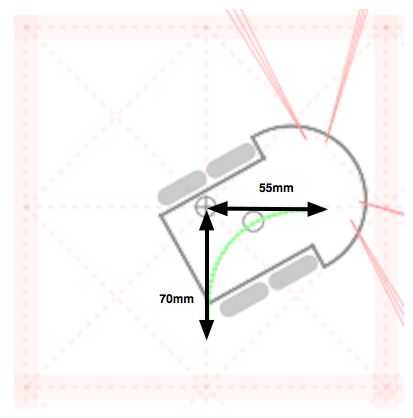