A little while ago, I came across a Japanese micromouse web site where the author had taken long-exposure pictures while his micromouse smooth turns. I decided to do some experiments of my own and test the effect of speed on cornering.

It soon becomes clear when you have your mouse running a bit quicker that the cornering behaviour changes with speed. A couple of things happen depending on how you generate the turn profile. I took a simple trapezoidal profile for angular velocity. The speed and maximum angular velocity were changed in the same ratio. That should keep the constant-velocity part of the turn at the same radius of about 120mm. The angular acceleration used was left alone but should really have been changed as well.

Two turns were then run. One at low speed with a speed of 600mm/s and then again with a speed of 1200mm/s. The turn is of 900 degrees in total with a 360mm straight before and after.

Both turns were captured on camera by setting a 10 second exposure at f/8.0. A single blue LED was illuminated and the result is a continuous trace of the mouse path.

Here are both turns superimposed on each other: 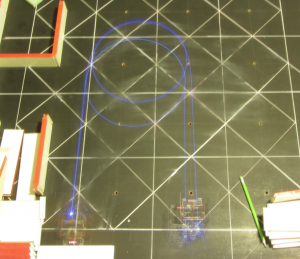 You can clearly see that the faster turn starts later and is less stable. It appears to have a larger radius but if you look closely, the radius is nearly the same. If anything, it may be smaller. The different start and end tracks are caused by the extra distance travelled by the mouse as it transitions into and out of the turn. On the slow turn, you can see that the mouse seems to get into constant radius almost immediately whereas there is a very clear lead-in for the fast turn.

Whatever the reason, you are going to have to compensate for this effect when designing turns at anything more than modest speeds.

The original reason for taking these images was to make it easier to set up the gyro and turn coefficients. With this technique it is very easy to see the exact effect of adjustments.

3 thoughts on “The effect of speed on micromouse smooth turn”