As set up for the last post, my micromouse Decimus is performing reasonably well on the ground. So far. The data plots show some features that are a little bit curious. However, my concerns over the apparent error in the endpoint were a little misleading. The recorded error is derived from the integral of the set speed and the total count from the wheel encoders. Thus, it does not represent an actual error on the ground…

This may not make much sense but the distances according to the set speed are representative of what the profiler thinks should be happening. That is to say, the profiler takes the desired speed and acceleration and uses them to derive a set speed for the mouse. This is used to tell the motor controller where the wheels should be. It is a relative term. Actual distance on the ground is measured from the encoders. And, so far, the mouse position on the ground is correct to less than the error shown on the graph. Effectively, the error plots just say how hard the controller wants to drive the motors. As with any control system, without an error there will be no restorative force.

One of the features that is interesting is the oscillation after turn-around when we switch from accelerating to decelerating in a couple of milliseconds. This is a big change. Possibly the biggest and may well represent the hardest work the controller has to do. Another feature is that the position error seems to reduce as the mouse gets faster. Now this may be due to the controller being under damped or it may be due to an incorrect value for the speed related feed forward term.

When a motor is turning, it generates a voltage that opposes any more current flowing in to it. This is the reason that a motor runs at a given speed for any particular applied voltage. Consequently, when the motor is running quickly, we need to take into account that back emf by applying an even higher voltage to the motor if we want to change its speed. Decimus does this. A value for the PWM is calculated according to the error terms and then an additional value is added that is proportional to the motor speed. In the last trial, I was using the actual motor speed as measured by the encoder counts. This is a bit crude and there is an implicit error of +/- half a count even at best. A simple change is to use the set speed which is maintained to a higher precision. 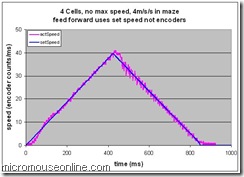 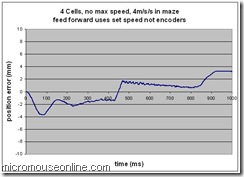 It is clear that this has reduced the oscillation somewhat. It has had the effect of filtering the applied feed forward term. After seeking some expert advice, it was suggested that the value of the speed feed forward term might be a bit high. As it stands, the term is calculated from the published motor specification. I need to determine a value experimentally that is better suited to the actual motors I have. Out of interest though, I ran the same trials with significantly larger and smaller values of the back emf constant. 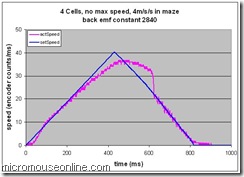 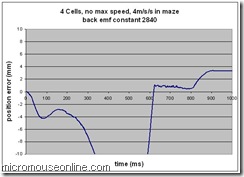 Wow! Now the response is just rubbish. Well, not quite but it is pretty poor. The finishing position of the mouse on the ground overshoots by 15mm or so even though we get the same apparent error from the data. The reason for this is probably the huge deceleration at about 600ms. At that point, the tyres will almost certainly slip and the mouse will slide on effectively out of control. This is a valuable lesson. I had seen a tendency for the mouse to overshoot when the acceleration was turned up and now I understand why. It was not the high acceleration as such but at that time, I had no feed forward control term. This will drive the controller to extremes in an attempt to eliminate the errors. The resultant skid is invisible to the observer. You can barely see what it is doing anyway. Even filming them doesn’t help much. For these trials, the entire sequence would be over in about 20 frames with a PAL camera (25 frames for the NTSC world). The high speed performance is the thing to notice. As the mouse gets fast, the controller is unable to generate a high enough voltage to keep accelerating the mouse.

So, the obvious question now is – what happens if we use too much feed forward. For the next trial, the constant was increased from 3840 to 4840: 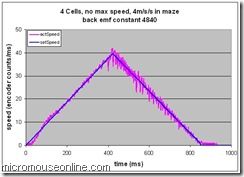 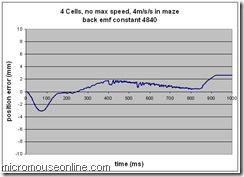 Once again, the initial and final phases of movement are pretty well unchanged but there are differences at high speed. Most obviously, the decelerating phase is much more noisy than before although the position error is not degraded too severely. I think. I really don’t understand where this noisy response comes from. Bear in mind, the controller gains have never been properly set so until that is done everything is a bit of a guess. The frustrating thing is that the acceleration portion behaves pretty well exactly how I would predict. The other feature is that the speed of the mouse (on average) more closely follows the set speed at the point of change over.

After a good number of trials, I have found a value for the back emf feed forward constant that seems to improve matters considerably. It is still a bit too big but that is safer than having it too small. Tests in tiny maze sections don’t tell you what will happen at speed. In particular, the speed compensation may work just fine at the relatively low speeds found in the maze but you don’t want it to all go pear shaped when you hit a long straight. Since I only have a 5×5 maze, I was forced to clean a bit of the kitchen floor and test it in there. The surface is different to a maze but it is hard and smooth. I think that if I can get 4m/s/s in the kitchen, a reasonable maze should be fine. Decimus has a designed-in top speed of 2.8m/s. This is an arbitrary figure that is based on all the losses I think are in the system and assumes a battery voltage of at least 6.5V as a worst-case. If I chose 7.2V for the battery voltage, I should be able to do 3m/s. At this stage, better safe than sorry. It takes 0.7 seconds to reach 2.8m/s by which time the mouse has travelled 5.4 squares so I set the run for a total of 12 squares. I only have room for 1000 data samples so the plots are truncated. 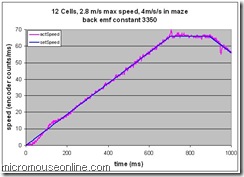 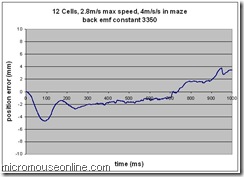 Even a change in speed compensation of 0.1 changes the behaviour from stable to unstable so I am not going to tune this any further for the time being until I can get in a real maze. The problem now is that so many of these constants inter-relate and I don’t have a good enough mathematical model to let me predict exactly how. Even if I did, there would still be a need for much empirical testing.

A final point occurs. During the initial phase, the mouse is trying to catch up with the controller and is eventually forced to accelerate harder than the design value in order to do so. This is a potential source of trouble should the mouse lose grip at that point. The same will happen at the changeover points. Either proper tuning of the controller will help reduce this or it may become necessary to introduce a smoother change in acceleration at those points.