The 2013 All Japan Micromouse Contest saw what I believe was a world first. That is – a micromouse used a camera to look at the entire maze, map all the walls and then perform a speed run straight to the centre.

After a promising start in 2010 with another design, Yamashita-san entered the 2012 contest with this mouse: 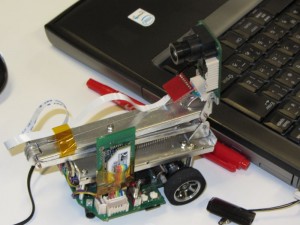 On that occasion, he was not entirely successful but everyone who saw it perform was greatly impressed. The mouse positions itself carefully in the start square, raises the camera on its boom and takes a series of still pictures of the maze. On-board processing remaps the images from their necessarily shallow perspective and fits them to the known dimensions of the maze. Knowing where the posts are and overlaying parts of the images allows a remarkably good reconstruction of the maze as if seen from above. Here you see one of those images as captured by the camera and displayed on a computer monitor after the event. 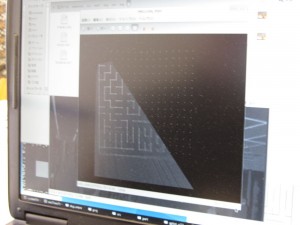 As the walls get further away, they become more indistinct because of the shallow viewing angle. Even so, it is perfectly clear to us where there are walls and where there are not. The task is a little more complicated for the micromouse. The technique (as I understand it) is to examine the area between the posts which are all in known locations. If the brightness there (actually the red-green channels) is above a threshold, there is a wall. Otherwise, there is not.

All this processing is not trivial and Yamashita-san uses an FPGA with two – yes, two – custom processors on board. Everything needed for a mouse is also on this FPGA, including the PWM, encoder interface and ADC. A version of GCC was used and adapted to emit code for these custom processors. The images are quite large so there is an interface to a 32MB RAM to store them. Image capture is performed by a second FPGA and, for debugging, the images can be displayed through a video output.

This is a really remarkable piece of work. Many people have tried but few have got very far with image capture and micromouse. Yamashita-san thoroughly deserves his Special Award form the New Technology Foundation in Japan. It occurs to me that, by not having to waste time searching, this micromouse could win a prize under the rules of APEC, Taiwan and the UK since it will not incur a search penalty.

You can find out many more details at the builder’s blog here:

Have a look. You will not be disappointed.

One thought on “Micromouse uses a camera to solve maze”