Today is Friday, November 18th and I am back in Tsukuba for the 32nd All Japan Micromouse Contest. This is my third visit and it is just as exciting as the first…Remarkably, I managed to get a reasonable night’s sleep last night. Although I still woke up at 2AM, 4AM and 5AM, each time I was able to get back to sleep. When the alarm finally went off at 7AM, I was completely surprised.

The venue for the contest is the Tsukuba Capio and does not open until about 2pm on the Friday so in the morning, Harjit Singh, Dave Otten and myself, went off to hunt down some of the indian restaurants we believed must exist but which we had not previously been able to find. In the end, we managed to find four more to add to the one we already knew. It turns out they are all clustered in one area right near the Capio and we had been walking for ages to find the others.

That was our evening meal planned so we went back to the hotel to collect our gear, stopping on the way for a selection of baked goods from the Seiku department store. By and large, with the items all labelled in Japanese, it is pot luck what you will end up with so we just picked out a few interesting-looking items each for sharing. That worked out pretty well.

With the blood sugar rising, it was time to put the mice into a maze and see how they were going to go.

These things are always surprising. In so many ways. I cannot speak well for how things went for the others but, for myself, it was not too good. The hall contained three full-size classic mazes for people to practice on as well as an 8×8 section near the work tables. I calibrated the sensors and did some basic steering tests and all seemed well. Next was a searching and running test on one of the large mazes. That was disappointing with some control issues that were a bit puzzling.  While still curious about those, I put the mouse – Decimus 2A – into the main contest maze where the lighting is turned right up. Suddenly, the mouse started to run into walls. Very upsetting.

After a bit more testing and liberal application of the oh-so-handy bluetooth module, it was apparent that the forward-facing sensors were pretty well completely saturated by the light levels in the contest maze. The effect of this is for the sensor to hand back a distance reading of infinity. Effectively, the mouse had no way to see walls ahead.

It is not clear why this problem had not shown up before. At home, the sensors had been tested with ambient light levels of 2000lux from a quartz-halogen floodlight. The contest lighting was clearly much brighter. So much so that the maze floor was comfortably warm to the touch. So, what to do?

Since it is the detector that is saturated and there is no possible adjustment on the TSL262R, the only hope was to try and keep out some of the ambient light. All I could find and think of was some self-adhesive teflon tape that I keep as replacement skid material. As far as I could tell, the tape that I had attenuated the IR by about 50%. This is enough to allow the sensors to function in the brightly lit contest maze. Later, I also added side-cheeks. Small pieces of paper to help shield the detectors from light entering from the side. 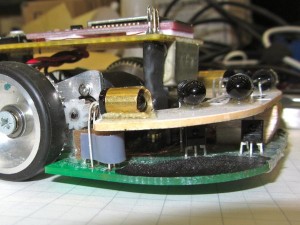 ALl this worked well enough in getting the basic sensor response back where it should be but the curve was now slightly different so the detection of walls and edges while exploring needed the threshold values changing. A combination of this and other effects seems to mean that other operations that rely upon the forward sensors – like steering down diagonals – now seems to misbehave.

All-in-all, none of this is good and does not bode well for the qualifiers tomorrow. Tonight, though, will be all about going through new sensor logs to see if it is possible to eliminate the new errors before the qualifying event tomorrow.

One thought on “All Japan Micromouse 2011 – Practice day”