Our winter event is RoboTIC, hed at the Technology Innovation Centre in Birmingham. This year we gathered on Saturday 29th November and held the usual semi-formal set of competitions…

Apart from micromouse, there were also folk present with bipeds, mini-sumo and line-following robots. The biped crowd brought a variety of robots including the excellent Bioloid kit. Apart from bipeds, this kit can be configured to make slightly creepy hexapods and a variety of other configurations. As ever, I didn’t get to spend much time looking at these, being pre-occupied with the micromouse side of things. Maybe next time.

There was a small collection of line-followers. All of them were more than able to outrun Bob so I will need to do some serious work there or risk utter humiliation in the competition we intend running in the summer. Of special interest was the extra simple follower built with just a pair of reflective sensors, two darlington transistors and a handful of passive components. It was very smooth in operation. surprisingly fast and should make an ideal starter for schools entrants.

Several maze-solving mice entered the micromouse competition and I was, once again, beaten by Derek Hall with his MouseX and MouseX2 entries. Here is a view of the final maze: 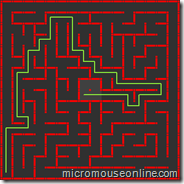 The route shown is 46 cells long. It is the shortest path. Weighting the corners to prefer straights would have resulted in a slightly longer path up the outside edge before turning in for a total length of 48 cells. This is the path taken by MouseX2 – I think. Mouse X2 had a best run time of 8.71 seconds on this route. Unfortunately, Decimus seems to have put in a phantom wall and took a different path. Decimus can display its map on the built-in screen. This is what it had at the end of the run: 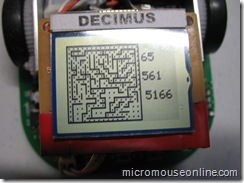 The path taken is not shown on the display but putting Decimus’ map into the simulator shows the route to have been 61 cells. Decimus did this 61 cell path in 10.67 seconds – about 5.7 cells per second. Now this is really annoying. At that speed, it may well have been able to take the actual best route in only 8.1 seconds or so. In recognition of my repeated failure to actually beat Derek, I was given a special ‘bridesmaid’ certificate. Here is the data from the timekeeping software:

For each mouse, the best run time and the best score are emphasised. If you needed reminding, the score is a combination of the run time and the total time in the maze. It is quite clear that there is a huge benefit to finding the centre of the maze as quickly as possible and that, having found the centre, there is little benefit in doing additional runs at higher speed. The accumulating maze time wipes out the effect of all but the most dramatic increase in performance. The Japanese system of simply recording the fastest of five runs would seem to give more scope for nail biting outcomes.