At the 2015 UK Micromouse contest on Saturday, I ran the latest revision of Decimus 4. I will call this one D4DR1. It really is about time I built a new mouse though. 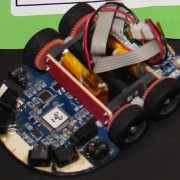 This version of Decimus 4 has a few changed. Most obvious is that I replaced the sensors. The same devices were used – SFH4545 + SFH409FA – but I used some 3D printed mounts to help with the alignment. At APEC earlier this year, I crashed the mouse and managed to bend one of the emitters out of alignment. It took hours to correct all the consequences and the mouse still would not perform right.  After that, I decided I had to find a better way.

At Minos I saw some parts printed on the CEL Robox 3D printer. This turns out to be a great little printer and it can be had for about £760 with a bit of luck on offers and pricing shenanigans. It is very easy to use and pretty much works right out of the box. Their black-as-night ABS filament turns out to be an excellent absorber of IR light and the first thing I made was some sensor mounts.

These simply ensure that the emitter and the detector are axially aligned so that when the position is adjusted, both devices move together with their alignment preserved. I really wish I had done this a long time ago.

With the sensors re-aligned, I could take advantage of better positioning and improve all my turns. This is a long, tedious process of trial and error backed up by some handy simulation. In the end, I managed to develop a set of turns that would allow the mouse to go around with a peak centripetal acceleration of nearly 2.5g. For example, this means performing the 90 degree straight to straight turn (90L or SS90 or whatever you call it) at speeds of up to 1625mm/s. Previously, my best speed for that turn was 1349mm/s and a 20% improvement should make a real difference to run times.

Faster turns are always good but they must remain stable. It does not take long to realise that a ragged turn takes longer than a smooth one. Apart from performing the turn itself faster, the average speed of the run increases as well. Just before APEC, I fitted 3V motors so that my top speed on a straight was also going to be better. Not really sure how fast but it should be able to exceed 5m/s without too much trouble.

So – how much difference does all that really make? Who knows? In a perfect world, I would be able to go and set up some old contest mazes and run them to compare speeds. I cannot do that so I can only report on how this year’s UK micromouse contest went.

Pretty good as it happens.

With almost no setting up it was clear that this version of Decimus 4 could run faster and more smoothly than any previous version. During the contest heats in the morning, it comfortably won with a fastest run time of 4.25 seconds over the relatively short route. That was a full second faster than the nearest competitor – MingMing II run by Zhang Hao Ming.

After such a good result, All that remained to decide over lunch was how fast the first speed run should be. If all goes well, the first fast run is probably going to be the only one that counts under the UK rules. Because of the search time penalty, all subsequent runs are likely to gain penalty points faster than they can lose run time. Thus, the first fast run is everything.

My mouse is set up to find the best route it can, return to the start and immediately perform a speed run. When the code is loaded up into the mouse, that first speed is hard-coded in and increases by a fixed increment after each run. It can be changed whenever the  mouse is picked up but that never happens until after it has got in its first fast run. Essentially, the mouse is fire and forget until it gets that first run done. After that, I run it in Japan rules mode where the tyres get cleaned and the speed can be adjusted before a run.

The trick then is to select the highest sped that you think can be run with maximum safety. It is always a difficult decision. Too slow and the mouse will not get its best score and, remember, the score will not improve with subsequent runs. Too fast and you crash – a touch penalty because of the recovery and more time penalties and your chances of a good place are all but over. The only time this can be good is when all the other mice also crash so you all get the same touch penalty. The pressure to get this right is very high.

In the end, I chose to have the first speed run perform its corners at a maximum centripetal acceleration of 18m/s/s. This is the maze used in the finals: 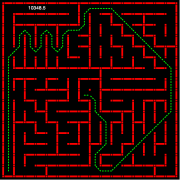 The route length is 10.3m or so without many difficult corners.

Having qualified fastest, Decimus 4 was going to be last to run. That is always stressful as you get to watch the leading scores get smaller and smaller. Before I got to go out, HongHong1 had posted a fastest run of only 7.3 seconds on its first speed run and MingMing III had managed a score of just 10.78 on its first speed run. By the time I was set to go, I had pretty well resigned myself to a more modest finishing position than I had hoped for.

That speed choice worked out pretty well though. After a remarkably brief search of 51 seconds, Decimus 4 found the goal and made its way back to the start for its speed run. There is a delay of five seconds in the start square to give me time to pick up the mouse if I have to. Waiting for that speed run to start seems a lot longer than five seconds and you even have time to wonder if it has broken down.

Than it was off! It looked good all the way round and finished with a run time of 6.4 seconds and a score of 8.96 seconds overall. A win! And a good one at that. Actually, to just squeak through is good – this was a full second faster than the closest rival for run time and 1.8 seconds better in terms of score.

After the critical first run, I reverted to Japan rules and cleaned up the tyres to see just how fast it would go. The best run time I managed was 6.19 seconds. Now that is a good time and I am pretty happy with it but there are two concerns. One is that it still might not be enough to get into the top five in Japan. The other is that I was running at the highest speed setting I had available. With a bit of luck, I can increase that a little in the expectation that the Japan maze will be better than the local maze. The question is – can I improve it enough to stand any chance against the competition in Japan. Especially since I expect to see several vacuum mice following the astounding success of Utsonomiya-san last year.

First stop Taiwan though. Maybe I can get a prize there. That would be nice.