On June 26th 2010, Birmingham City University hosted the UK micromouse championships as part of their robot festival event. Along with the micromouse event, there were wall follower, line follower, sumo, ant weight, biped robots and much more.

With the welcome presence of St Joseph’s Institute from Singapore, this year’s event looked to be one of the busiest ever. Everywhere you looked there was some kind of robot-related activity. In the large space outside the theatre, visitors were treated to an impressive display of technology and ingenuity. The schools events took place here, the results of which have already be presented along with a write-up from Bernard Grabowski. As well as their own contests, participants were able to get first hand experience handling ant weight robot wars machines every bit as clever and deadly as their full size counterparts. Some of the engineering on display was extraordinary.

Not far from there could be found the mini sumo arena. Competition was fierce but friendly as robots, some of which had literally been put together only that morning, battled to eject their opponents from the ring.

The biped robots are always a point of fascination and their sophistication grows with each event. It is not so long ago that building any kind if biped robot was little more than a pipe dream to be considered only by well funded robot research laboratories. Now, anyone can have one to experiment with for themselves.

Alongside the Scalextric for Schools stand was a fascinating display by graduate student Jamie Wilcox who has fitted telemetry, on-board sensors and a controller to a Scalextric car to endow it with some of the capabilities you would expect to find as part of the Dynamic Stability Program found of modern road vehicles.

Unfortunately, I missed out on getting some photos as I was somewhat focussed on the competitions inside the theatre. It was here that the main auditorium held the micromouse maze used for the wall follower and maze solver classes. As on previous years, there were enough entries to require that part of the wall follower contest was held in a separate room but they joined us on the full-size maze in the afternoon for the finals.

Our visitors from St Joseph’s in Singapore brought with them four mice which were programmed to take part in a number of contests. All under 16, they were extremely competent in all contests. The mice they use are all stepper driven and based around a very similar chassis. Although three of the mice used the development environment distributed for Singapore schools contests, oneof them, SJI1 stood head and shoulders above its stablemates and was entirely programmed from scratch by its handler, Wei Hao Tan. He has done a very good job of it too, giving apparently more nimble DC mice a good run for their money. 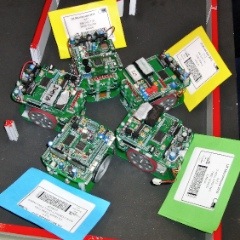 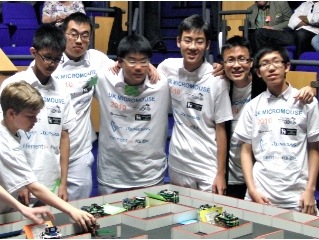 The morning was taken up with the qualifying rounds. These serve more to see who is likely to do well and so determine the running order in the finals than to eliminate unworthy contestants. Mouse builders are free to enter as many mice as they like and only when we can no longer accommodate them all will we make the qualifiers an elimination round. The UK contest is possibly the most forgiving of all such events and considerable leeway is given to entries to allow them to show off their best talents.

Here are the results for the qualifiers in each event. Score and run times are in seconds. In the heats, each person gets a place which is used to determine the running order in the finals:

Not a good showing for Decimus or Decimus 2, I think you will agree. In fact, I was quite dispirited and, as usual torn between tinkering with the mouse and hoping for the best. A bit of tinkering seemed mandatory though so a whole bunch of running parameters were altered and I fretted over a small lunch…

During the afternoon, all the finals were run. For the finals, contestants are permitted to run several mice but places are awarded only to the best placed mouse for each contestant. This allows plenty of mice to run but ensures a fair distribution of prizes:

From a purely personal point of view, I had a great day. I would still have had a good day, even without winning.

None of this would be possible without the hard work and enthusiasm of Tony Wilcox and his team at Birmingham City University who organise and arrange a very slick operation each year.

Prizes this year have been provided by Phaedrus Systems and Renesas so a special thanks to them..