For a common configuration two wheel  mouse, it will be pretty obvious when the centre of mass (CoM) is not over the wheels as the mouse will always want to tilt one way or another. However, with a four wheel configuration, it is not so easy. For optimum performance, you will need to know how much of the mouse weight is on each of the pairs of wheels. To determine this you will need a sensitive weighing scale. These are readily available with resolutions of 0.1g or better. Don’t try using the kitchen scales, they will not be accurate enough. The idea is to weigh one end of the mouse as well as its total weight and then use those numbers to calculate the position of the CoM.

Suppose we have a four wheel mouse, seen from the side:

With the mouse supported by a pivot at one end, we can draw two sets of torques that must be equal and opposite.

The pivot is provided by a support at the position of the green arrow. F1 x D1 is the torque as a result of the mouse weight acting through the center of mass at the red dot. Countering that will be F2 x D2 where F2 is the upward force provided and measured by a micro balance at the other end of the mouse. Since we know F1, F2 and D2, a simple bit of algebra using only the magnitudes of the forces lets us easily work out D1, the position of the centre of mass: D1 = D2 x F2 / F1

Here is a photo of the setup taken while trying to see how the battery placement might affect the position of the centre of mass on a test design. The balsa supports just make it easy to get the pivot and suspension point right. the pencil eraser has a similar weight to the battery pack and doesn’t slip around. 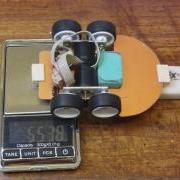 So, that was easy enough. What about the height of the centre of mass. This is a critical value. In general, the lower it is the better for both cornering and acceleration. In many respects there is not much point in measuring it since you want to do everything you can to make it as low as possible. If you are keen though, knowing the height of the CoM lets you calculate the weight transfer under extreme conditions and will, for example, let you calculate, for the four wheel configuration, how hard you can brake or accelerate and still keep all the weight within the tyre footprint.

I don’t have simple sums for this. Instead, I attach a length of electrical tape to the mouse and hang it up in the air. 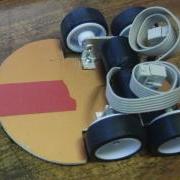 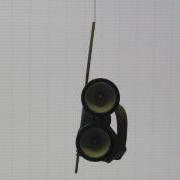 The tape prevents the mouse from spinning around from its suspension point as it would if I used wire or thread. Viewed from the appropriate angle, I get a nice clean, vertical line that must pass through the centre of mass of the mouse. I hung this one up in front of a spreadsheet display to give a reference background. The next step is to take the picture and draw some lines on it in a photo-editing package, from which it is possible to make fairly accurate measurements.

Altogether, the technique is pretty accurate even if it is a bit of a fiddle to get the vertical measurement.

One thought on “Measure your centre of mass”