A while ago, I posted a way to calculate the position of the centre of mass of your micromouse. One or two people wondered why I might care so much. A couple of calculations with Decimus 4 illustrated why it might be important. 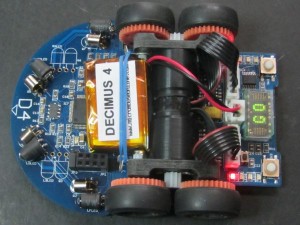 Decimus 4 is a four wheel mouse. One of the benefits of the four wheel design is that, as the mouse accelerates and brakes weight is transferred to the rear or front wheels rather than to a skid. Since all of the weight will be on the driving wheels at all times, there will be no loss  of traction at high accelerations.

As far as I know most, or even all, current designs place the centre of mass not exactly half way between the wheels but a little further forward of that point. I think this helps keep the cetre of rotation constant. Since there is a bit less weight on the rear wheels, they slip sooner and the front wheels dominate the movement.

If the centre of mass is too close to the front wheels, we can accelerate very hard and pretty well guarantee that the mouse never tips back so far that is lifts the front wheels off the ground but there will come a point where deceleration is so high that the mouse will tip forward onto its front end. This is not very elegant at best and the mouse will not be able to brake as hard as it can accelerate. Furthermore, the front of the mouse would need profiling or contact with a step in the maze would be disastrous. Two wheel mice have front kids designed to ride over such steps.

All this is also affected by how high the centre of mass is. A high centre of mass is bad because it makes it more likely that the mouse will tip over. On Decimus 4 (D4A), it is a bit high because the tyres are a little fatter than I was expecting.

So, that is the theory, how does D4A behave?

I jammed the wheels to stop them turning, installed the battery and placed the mouse on a flat surface that could be raised at an angle. Raising the surface simulates the weight transfer due to braking. At 45 degrees, the effect is the same as having the mouse brake at 1g (9800mm/s/s). D4A was raised up until it tipped forward onto its front edge and the rear wheels left the ground.

That happened at just 38 degrees – the equivalent of 0.78g or 7644mm/s/s. Not what I was hoping for. By a long way. This is a mouse that I had hoped might be able to do at least 1g accelerating or braking. The tyres are up to the job. They don’t start to slip until 1.2g or more. Bear in mind through this that static tests like this are not quite the same as actually running the mouse. Nevertheless, while I will, in any case, code in different accelerations and decelerations it seems pretty wasteful to only be able to manage 0.78g for braking.

All this was a bit disappointing and I struggled to think of a way of improving things without major work. Then I remembered a mouse I had seen where the owner, in a desperate attempt to lower the centre of mass, had glued a steel plate to the bottom of the board. What I needed was more mass at the rear of the mouse.

As it was, the all-up weight was 88.5g. I knew that the motors were capable of driving a significantly heaver mouse with adequate performance so adding a few grams was not out of the question. What I didn’t want to do was increase the rotational inertia any more than I had to. After a bit of poking around in the scrap box, I found some strips of brass 1.6mm thick that could be cut into neat squares and fixed under the PCB in the rear corners. The corners are the worst place for the rotational inertia but they were the only flat, clear areas of PCB. Two squares added here would move the centre of mass back as well as slightly lowering the overall centre of mass position. They would have a relatively small effect on acceleration and would not get hung up on any steps in the maze.

Two squares with a combined mass of 4.6g were added bringing the total mass of the mouse up to just 93.1g. Their centres were 30mm behind the motors. The effect was to move the centre of mass back by only 1.9mm. It was now at 57.6mm from the front of the mouse – only 2.4mm in front of the motor centres. How much difference could that make? The tilt test was performed again and I was surprised to find that the angle at which the mouse tipped forward had been increased to 45.5 degrees – the equivalent of a deceleration of just over 1g. Exactly what I wanted.

In summary, moving the centre of mass back 1.9mm by adding just 4.6g of mass to the rear of the mouse had improved its potential braking performance from 0.78g to 1.02g. That is nearly a 30% improvement. Now that is worth the effort I think.

Oh, and the results show the centre of mass to be about 9mm above the ground and that an acceleration of 1.5g would be possible before the front tyres lift off if there is enough grip.