When I last had the chance to visit Taiwan for a micromouse contest, I was pretty sure it would be the first and last such opportunity. And yet, here I am again, two years later, excited to be back in this fascinating country with such welcoming hosts.

The journey out started for me at 6AM on Friday 23rd September in the UK. Total Journey time will have been about 20 hours. A side effect of changing my clocks is that I lose track of what time it is subjectively. Since I cannot do anything about that, it is best to just go with the flow. Eat when hungry, drink when thirsty and hope that sleep will sort itself out.

Others will be arriving from America, Japan and Singapore during the course of the day. I think David Otten gets the worst deal, travelling from the east coast of America to Taiwan. The time difference is 12 hours so his journey is literally half way round the world. As it turned out, he had a problem with his flights and ended up spending over 13 hours at LAX. Not much fun at all.

My fight from Amsterdam was delayed but only by a couple of hours. In spite of that, and partly by virtue of a shorter change in Bangkok, we were able to get to Taipei only a little late. Thanks to the relatively easy access to the internet, I was able to keep our host informed as we went. Schiphol Airport isn’t a great place to eat but you do get two 30 minute free WiFi sessions with no fuss. They cut you off without warning at the end of the period but then you can go to the electronics store where the Apple kit has a live internet connection. Just remember to log off and clear the browser cache when you have finished. The Bangkok boarding areas have computers with internet access so long as they are not being hogged by selfish bloggers. 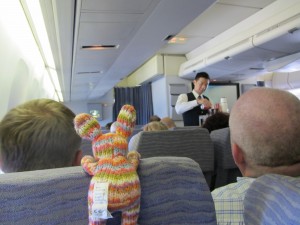 The China Airlines flight was reasonably comfortable, the older 747 used has plenty of leg room and, once again, I had nobody in the seat next to me so I could spread out a bit. There is no useful in-flight entertainment on these aircraft but that just means it is easier to read and doze the hours away. I rather like the food on China Airlines flights so that is a good thing as well. Generally speaking, scheduled long-haul flights seem to look after you reasonably well and on these flights, there was plenty of food and drink so I was happy enough.

For additional entertainment there is always the rest of the passengers. The guy in 33G a little way up from me treated us all to an unwitting display of how not to get a bag in, and out, of the lockers. He really had no clue. Had he only laid it on its side, it would have gone in easily but for some reason, he just pushed harder and harder disrupting everyone, including the fight crew. In the end, he took it down, removed a laptop and tried again. This time, he had it on its side and it went in with plenty of room to spare. The laptop made no practical difference. Except that now he wasn’t sure what to do with it.

The service engineers thoughtfully provided most passengers with an interesting logic puzzle. Exactly which armrest switch turned on the light that pointed to your seat? If you were lucky, one of them did. All of the lights on my row pointed at the middle seat. I guess they replace them without looking or noticing that they are angled different. I hope the same guys don’t do the avionics.

On arrival at Taipei, I was greeted by the very reassuring sight of someone holding a card with my name on it and I was whisked off to a minibus and driven to Lunghwa University to meet Juing-Huei Su – the contest organiser and all-round great host – and Khiew Tzong Yong – a top competitor from Singapore whom I have had the pleasure of meeting a number of times now. 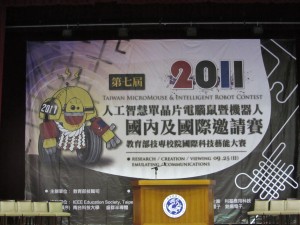 There was then a couple of hours in which we could get in a bit of maze time and set up the mouse for the local conditions. I noticed that the front sensors seemed to be acting a little strange but was reasonably sure it was going to be OK. Setting up the speed parameters is a bit of a gamble because the rules only permit five runs and there is a search time penalty. Under those rules, it is rare to improve the score after the first speed run so there is some pressure to get in a fast run early rather than working up to a fast run as is normally done in Japan.

We discovered a possible issue with the timing sensors. These were bright enough to possibly wipe out the mouse sensors and could cause a problem as the mouse entered or left the goal area. As it turned out, that didn’t happen but it was a bit of a worry for a while.

After the session, we drove back to the hotel to check in and meet up with Ng Being Kiat before going out for dinner at a traditional Taiwanese restaurant. I have no idea what we ate but it was all good and I enjoyed it very much. On the rare occasions I saw a menu with English translations, I was often none the wiser anyway. Also with us for the evening was Professor Chyi-Shyong Lee – a colleague of Juing-Huei – who was to be with us for much of the weekend helping to make sure that we were thoroughly well looked after. 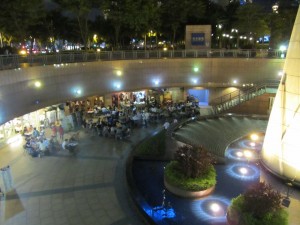 Back again to the hotel where Juing-Huei left us so that he could get home and see his family. We all set out for a walk in the large square around the Town hall. As we left the hotel, we bumped into Nakashima-san and Hirai-san from Japan. They had recently arrived and were returning from a shopping trip with their supper. They had been too late to join us for dinner and were now not able to join us for a walk. When we got to the square it was a real treat to find an open air classical concert in progress. It was even more of a treat to discover that Professor Lee’s wife was singing in the choir. He knew she was singing that evening but did not know where or when so he was delighted to meet up there. Wandering around the square was a delight. The temperature at 9pm was 25 deg. C and there was a great atmosphere. All ages were out and about, including a small boy who was (he thought) doing a great job of conducting the orchestra.

A short trip back to the hotel on the excellent MRT service and we were about done for the day. We were discussing what time to meet for lunch and had some concern about making sure that David Otten would get the messages we when. The concierge had been told that David might arrive at about 11pm. We were about to call it a night when David turned up. Another great coincidence. We got caught up with events a bit and finally went off to get some sleep. Everyone had had a long day and there was more to come.