It has been more than two years since I promised myself that I would move on and build a new micromouse using the STM32 processor. Finally, I have done something about it. The new mouse is Decimus 4.

Since it came out, the STM32 has always been the obvious choice for the discerning micromouse builder. It has everything you could possibly want in a controller. While I have been dabbling around with it, ST went and released the STM32F4 series based on the Cortex M4. Now I just cannot wait. The STM32F4xx processors take everything that was on the STM32F1xx and add more speed, more memory and an insanely fast floating point unit.

With what seems like everyone in the world following the lead of Kato-san and building a four wheel micromouse, I simply had to follow suit. As with the two wheel designs, there is already a certain amount of convergent design going on so my layout is much like many of the others.I am certainly not advanced enough to disregard the cumulative wisdom of so many South East Asian micromouse builders.

Decimus 4 then, uses a STM32F405 processor, six standard reflective sensors and a common four-wheel layout in a fairly simple arrangement. There are few fancy features and the emphasis is on a basic machine with the potential to compete well in Japan.

After designing the circuitry, and a certain amount of testing on a STM32F4 Discovery, the main board was laid out and the files sent off to the Seeed Studios Fusion PCB service. I have to say I am pretty impressed. The basic deal for a stack of 10, 1mm thick board up to 100mm square without shipping would have been only about $25. I added blue soldermask for $10 and went for the express delivery by UPS. There were no issues with the Gerbers, having used the Seeed design rules to verify the design before shipping. My stack of boards arrived in 8 days. The quality is excellent. 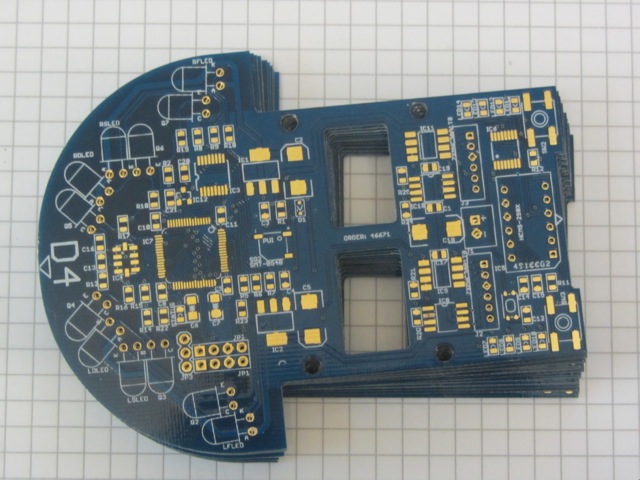 The only annoyance was that the blue soldermask pushed the price high enough for customs to want to charge me tax. That meant that I had to pay £4 tax, plus £11 to UPS for the job of collecting it. When the delivery arrived, I had nothing smaller than a £20 note and no way to get change so, after a short discussion, just handed over the £20 and treated the event as a lesson learned. Even after all that, I still got 11 mouse boards (they sent 11 rather than 10) for £70 or so which is not too bad in terms of unit price. Using a slower delivery method and avoiding the tax would have brought the cost down to about £25 I think. Quite what I will do with that many boards I don’t know. Maybe I will make a small fleet of them.

I did make one potentially serious mistake. The motor mount is too far forward. Or the forward sensors are too far back depending on your point of view. That means I will have to find smaller wheels and perform a little bit of trimming on the board but I think it will be OK. Measure twice and cut once they say. Well I only measured once. Let that be another lesson.

Now to get building and testing.

One thought on “Decimus 4 Begins”