The 2013 National Schools and Colleges Micromouse competition took place on Saturday 29th June as part of the TechFest event at the Technology Innovation Centre in Birmingham. High Wycombe schools provided 19 competitors and used their long-standing association with this event to good effect.  There were also entrants from Whitley Academy, Coventry and from Reading Bluecoat School. 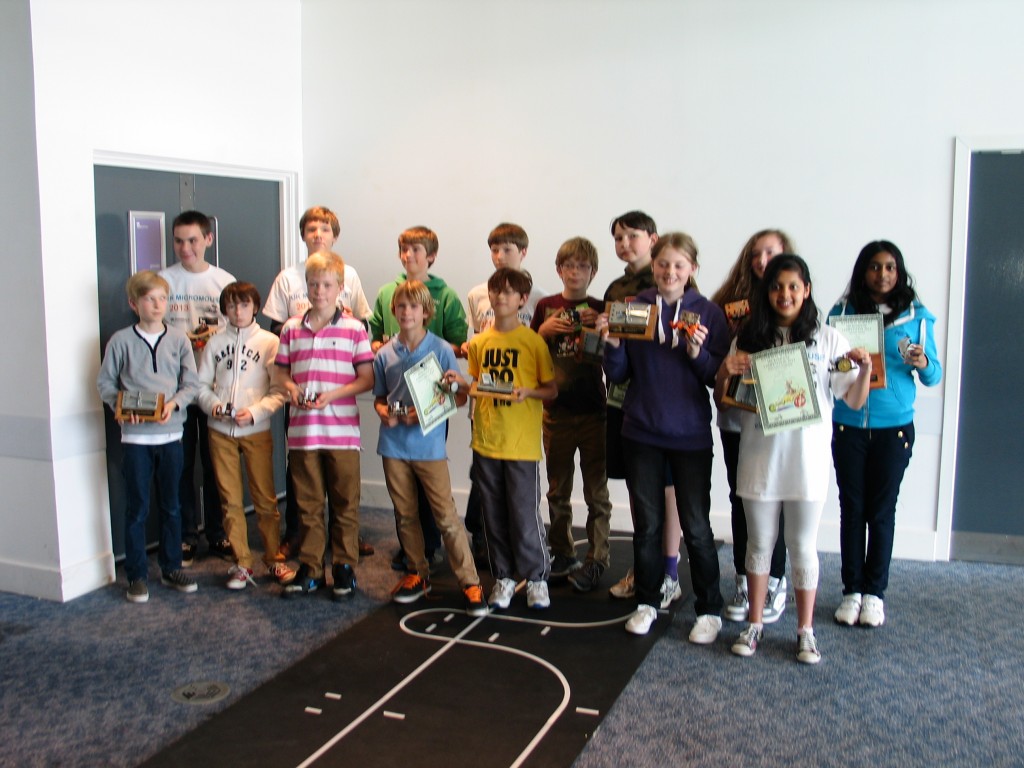 The events kicked off with the ever-popular drag race.  In this event the competitors have to race against each other in twin lanes of a 7 metre long track tightly following a central white line then stop before hitting the end buffers 1.5 metres beyond the finish line.  Reaction time as the starting lights changed from amber to green was highly significant and, in many cases, accounted for 10% of the running time.  It was noticeable that as the pupils progressed further into the knock-out event, “itchy trigger fingers” on the start line caused several false starts as nerves became frayed by the intensity of the competition.  There was a record entry of 20 mice for this event and the standard still continues to rise.  The top three mice showed an improvement in performance of an average of 2 seconds over the 7 metre distance compared to last year’s entries.

Eleven mice successfully negotiated the new longer line follower track.  The organisers were delighted to note some real innovation from Joseph White of Whitley Academy who entered a six-wheel mouse and successfully negotiated several bends and straights, covering about half a circuit before falling foul of one of the very tight bends.  The competition was keen with several evenly matched mice battling it out.  In the end there was only 1.31 seconds spanning the top three times.  The judges noted that it was attention to small details which distinguished the winning mice.  An adjustment to the sensor settings, often by as little as 1 mm, could result in a circuit time several seconds faster.

There was a change in the way the wall-follower event was organised this year.  It was agreed with the TechFest organisers that the fastest four school mice in the non-contact wall follower qualifying maze would compete for the three trophies in the senior maze during the senior wall-follower event.  There were 3 benefits from this arrangement: the pupils would experience the atmosphere of an arena with a knowledgeable audience; the seniors would see how well the next generation of micromousers was progressing and the junior and senior times over the same course could be compared.  On this final point the senior winner was only 3 seconds faster than the winning junior time of 46.53 seconds by “Jerry” the mouse of Emily Calton of Wycombe High School.

The junior MiniSumo event is not officially a part of the Schools competition but it continues to fascinate the youngsters who like the “combat” element as each sumo mouse battles to push it’s opponent out of the circular arena or “dohyo”.  There were four entrants this year who battled it out in a “round-robin” contest.  The overall winner, “Squiggles”, the mouse of Sarah Abrahams of Wycombe High School came through the whole contest unbeaten.

Overall the contest-within-a-contest between the boys of John Hampden Grammar School and the girls of Wycombe High School was an honourable draw with six trophies received apiece.  The star individual was undoubtedly Yakshi Aggarwal of Wycombe High who took a first and two second places with her excellent mouse “Supermonkey”.  She clearly has a aptitude for engineering and programming and was exceptionally focused in preparing her mouse before the event and in fine-tuning it on competition day.

Once again we are indebted to Duncan Louttit who ran all the Schools events and also donated the certificates and trophies.  And finally thanks are due to staff and parents who accompanied the boys and girls to the competition and to Tony Wilcox and his team for providing us with such excellent facilities.

The judges noted that there were many mice made to the same design but no two weighed exactly the same.  It was clear that the choice of battery technology could make a significant difference.  The lightest mice tended to use NiMH rechargeable PP3 batteries.

Joseph’s excellent mouse “Gerswin”, made during an after school robotics club, introduced the innovative concept of a six-wheel line-follower to the schools competition..

Charlie’s mouse “Llywelyn” posted a time faster than the eventual winner of the drag race but he unfortunately lost his quarter final due to a false start.

Sarah who won the unofficial MiniSumo event, remaining unbeaten throughout with her mouse “Squiggles”.

Note that although Benjamin recorded a faster time than the first and second placed mice, he was knocked out by George Emmins in his semi-final.