The 2014 UK micromouse contest took place on Saturday 28th June at Birmingham City University as part of their Techfest event. Last year the results were dominated by a small number of Chinese mice. With eight Chinese entries this year, how would the local entries fare?

For me, the day started out fairly calmly. I had been able to put a good amount of time into preparation this year and the final practice session on the Wednesday was very promising. The controller code has been refined; all the turns have been re-written and re-tuned; the search is significantly faster; trials demonstrated turns running at very acceptable speeds; the maze would be freshly painted. As a bonus, I discovered on Friday afternoon that by simply putting new tyres on, I could get 10% better speed. I slept well and wandered gently down to Birmingham for the contest. 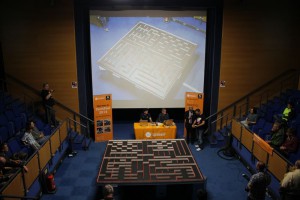 You have guessed what comes next. After setting up all the gear, I took the mouse out onto the fresh new maze for a quick test run only to discover that all my efforts appeared to have been for nothing. No matter what I tried, I could not get round the maze at anything better than 70% of by expected speed. There seemed to be very little grip and Decimus 4B showed an alarming tendency to crash. In very short order, my planned fun, relaxing day quietly fell apart leaving me with a growing sense of dread. Leaving aside the prospect of abject failure, how was I to go home and explain to my remarkably patient wife that the last couple of weeks antisocial behaviour on my part were all for nothing.

Several small tweaks did not seem to improve things. Even changing back to the old tyres made little difference. Time passed quickly and the heats came around well before I was ready. About all I could hope for was to run the heat at lower speed and pay close attention to the mouse behaviour and try to get some information from the log files that would help before the final.

As it turned out, the heat was relatively incident free. My search was reasonably quick but still need some work. A couple of the Chinese mice managed to find the goal in about 30 seconds compared to the 43 seconds Decimus took. Looking back, a lot of time was wasted looking into the small dead ends of combs. I need to find a way to fix that. Having to run at reduced speed meant that Decimus finished in fourth place after the heat. Three Chinese mice were well ahead. A combination of short search times and impressively fast runs meant that the best of hem, Hui Hui, had a score that was a full 4.5 seconds faster than Decimus. Curiously, conditions seemed to improve and Decimus now seemed more stable at speed. On its final run, Decimus put in a run time that was only 0.2 seconds behind the best time recorded by Hui Hui.

I was beginning to feel better by now but there were still the unexplained crashes in one section of he maze along with the crucial question of what would be the best speed to use for the all important first fast run. Recall that this is almost always the best scoring run under UK rules so it is vital that the mouse run as fast as it can without significant risk of crashing.

After a lot of testing and worrying, I found a simple bug in the turn code that meant I had been using an incorrect constant for the particular turn where the mouse had been crashing. That, then, was an easy fix once found. For the first speed run, I selected a speed that was significantly quicker than I used in the heat. This was fully 25% less than I had hoped to run at after the successful testing on Wednesday but it is better to finish with an honourably good time than simply crash out. I also turned down the search speed a little to make it a bit safer. I could not get anywhere near the likely search speed of the top two Chinese mice so it seemed better to trade a little performance for more safety. I also made a change to the acceleration used on straights as it was set high – even for low speeds – and could cause trouble.

The finals maze turned out to be similar to the heats maze and was going to be a nightmare to run. Lots of short straights and turns. No real opportunity to get up to a good speed and pretty well every tricky combination you could hope for (including the one I found the bug for at lunchtime). 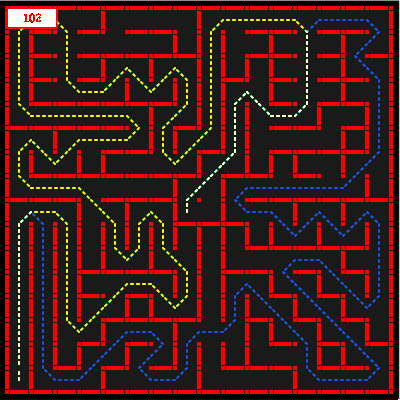 There were two paths. They were of similar length but it looked like the blue route might be faster because it had some longer runs than the yellow route. Counting squares while waiting for my turn, it was apparent that Decimus would run the yellow route just because it was shorter. I really need a better solver that properly takes into account the likely time to run a route rather than just the cell count. The Chinese mice all ran the blue route I think. The total distance down either route turned out to be about 15.5m with the blue route only about 200mm longer.

Even with a large number of mice running (we had fifteen finalists), it seemed that my turn came around very quickly. This time, Decimus performed pretty well and managed a first fast run of 14.36 seconds to give a total score time of 17.08 seconds. The three Chinese mice were next up. First of these was Hao Hui which, although it took only 13.01 seconds for its first fast run, took a long time completing its search to end up with an overall score of 17.18. Close, but not close enough.

Next up was Zi Hui which managed a search time of 35 seconds but crashed before completing its first fast run. That fast run was a really impressive 11.53 seconds but the touch penalty from the crash meant the overall score was only 19.11 seconds. The last mouse to run was Hui Hui which was even faster than it stablemate with a search time of under 30 seconds and a first run of 11.19 seconds. However, like its partner, the first run setting was just too quick and the mouse crashed before completing it so the overall score suffered as a result.

Decimus 4B was the winner! I was (am) hugely pleased and not a little surprised after the horrors of the morning practice session.

For a non-touch score, the mouse has to do all its exploring, return to the start and run at speed to the goal. But, by the time the search has finished, the tyres are dirty and the mouse performance is seriously compromised. Decimus had a first run time of 14.36 seconds. It may have been able to go faster on dirty tyres but I will never know. Later runs, on freshly cleaned tyres brought in a best time of 11.76 seconds so it was not a great deal slower than the new Chinese mice. Strategy and tactics play a surprisingly significant role in this contest once you start to look for a first place.

Full results will be up as soon as I can get them processed from the timing system.

Decimus generates quite a lot of logging data so I spent a fair time going through it. The most annoying discovery was that the change to forward acceleration that I made at lunchtime was not well thought out. Instead of making the acceleration proportional to the intended run speed, I accidentally fixed it at the low value of 6 m/s/s for all runs Way below the expected 10m/s/s for the faster runs. That cost me 0.1 seconds on the first 7 cell straight alone. In a maze with many short straights, high acceleration is essential for high speeds. Never mind – easily fixed and I still got the result I wanted.

Without the efforts of many staff and volunteers, these contests could not happen. Chris Evans did a fine job of organising the entire event and many staff and students at Birmingham City University helped out before, during and after the contest to make it a great day out for all.