The UK micromouse contest took place on June 25th in Birmingham. The venue was slightly different with the event being located in Birmingham City University’s new Curzon building. Read on for the results of the contest.With only nine entries this year and none from China or Singapore, this was a slightly reduced field compared to previous contests. However, there was still a distinct International feel with an entry from the Netherlands and a visitor from Japan who, unfortunately, was not able to bring his mouse.

For my part, I ran Decimus 4E largely unaltered since the APEC contest earlier this year. While there remains plenty to do with Decimus 4E, I feel it is time to move on and build a new, fan-assisted mouse. I hope to have it ready fro Taiwan in September. Failing that, it has to be ready for Japan in November. It is increasingly clear that there will be no way into the top five places without some kind of vacuum fan.

Because there are no real developments on my mouse, there is not much of a story to tell this year. I simply ran what I had and, aside from a couple of crashes because I was overconfident about sensor calibration, Decimus 4E ran pretty well.

The heats maze was reasonably short with a path length of about 750mm over a choice of two main routes: 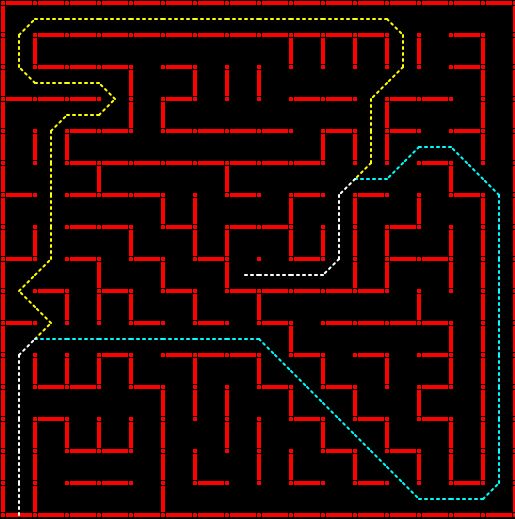 The qualifying scores were as shown below

Often, in the UK contest, the score-based results do not show the fastest mice but favour the mouse that can get the total time of the first and second run as low as possible. Fast searching is rewarded.

The finals were held in the afternoon and, since no other maze had been designed, we chose to slightly modify the All Japan 2012 qualifier maze. It was the easy way out but would also allow comparison of run times with the results of the Japan contest to see how the UK performance stacked up.

The maze was a bit longer with three basic paths of lengths of around 11000 mm. Choice of path will be very dependent upon the algorithm used for this maze. I know that Decimus 4E used the cyan path below but I cannot recall where other mice went. 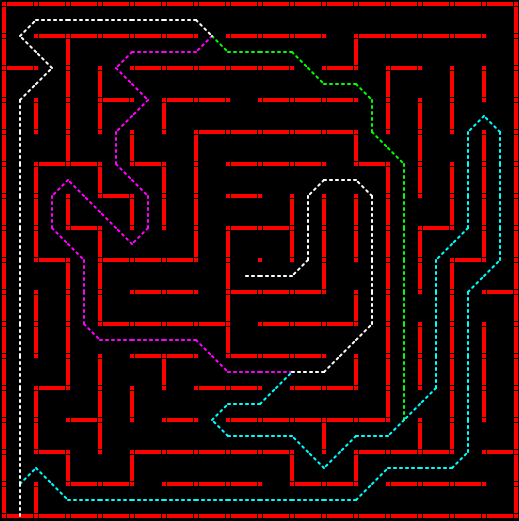 The final results were:

and the fastest run times were:

For comparison, the All Japan 2012 qualifier maze differed only in the last couple of cells around the goal and produced results of (Names are translated by Google – apologies to any Japanese readers if they are badly wrong):

Note how the top 11 mice were all within half a second of each other. The route in Japan was about 200mm longer than that in the UK contest. At an average speed of 1.7m/s that is a difference of about 0.12 seconds. I crashed repeatedly and only managed three search runs.

There is a senior wall follower event using almost the same maze but with modifications to ensure they can find the middle. Their final times were:

I am afraid I do not know how long the course was. Worryingly, some of the wall followers seem to be able to manage better average speeds than my mouse can when searching. It is not clear how except that they do not waste much time turning around in dead ends. I need to fix that.

Many thanks to Chris Evans and Tony Wilcox and their helpers at Birmingham City University and to the University for making all this possible.