The annual winter micromouse contest was held at Millenium Point in Birmingham by the University of Central England on Saturday November 19th 2011. Unfortunately, I was not able to attend this year but I gather everyone had a great day. I have managed to gather some results and the finals maze though…

While the record of score times looks like this:

In the Time trials – a fast run all the way around the outside of a 16×16 maze – the best times went to the purely mechanical Dee and D-Whiz. However, it is encouraging to note that Tim Foden’s Fat Cat put in a very respectable time. It should not be long before a ‘proper’ mouse is able to definitively beat the mechanical monsters.

In the maze solver contest, Derek Hall appeared to have mostly himself to beat although the time returned by Jim Chidley’s PICOne Turbo was looking good. Remember that the UK contest rules have a search time penalty so the score is a combination of the actual run time and the total amount of time taken, including exploration.

A look at the actual fastest runs is interesting:

Derek’s MouseX and MouseX2 are very closely matched. The six-wheeled FAB1 is nearly as quick but, I believe, has not yet got the integrated turns and diagonals fully set up. FatCat is actually a bit faster than PicOne Turbo but clearly must have taken somewhat longer to actually search the maze. There may also have been touch penalties involved. I am not sure.

The maze, designed by Ken Hewitt, in which these results were obtained looked like this: 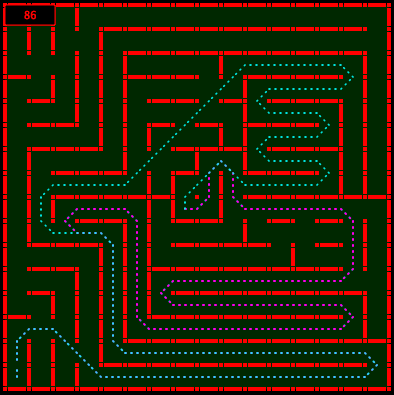 The two paths indicated were about the same length at 86 and 88 cells and should have given a straight-seeking mouse a good opportunity to show off. Depending upon how the pathfinder handles the goal though, a diagonal entry into the goal area can be a bit tricky and has upset mice in the past.

Derek Hall has uploaded video showing the runs of the maze solvers:

A number of photos have been contributed by Ken Hewitt and I would like to thank him, Tony Wilcox – the event organiser and David Hannaford for the data and details needed to write this post.

Since I was not there, feel free to correct any errors.