At the end of another All Japan Micromouse contest, there is plenty to look back on and lots of ideas for the future. The tide is definitely changing for the classic micromouse contest and probably also for the half-size. Fans of all kinds are everywhere.It is always a huge pleasure to be in Japan at the micromouse contest. There are so many entries and it is great to meet old friends and make new ones. The atmosphere is wonderful – deeply competitive but unfailingly friendly and helpful to all. The organisation is fantastic and overseas visitors are made very welcome. Translators are provided to help with any difficulties and the contest booklet even has sections in English to help you find your way about. the general instructions are in the form of a comic by Sanea Kawakami.

This year the contest was held at Meisei University to the West of Tokyo. All the events and the contestants workspace were located in the main gymnasium and, as usual, it was very busy during the practice and qualifying sessions.

The Friday practice session can be pretty stressful as you discover how well your mouse will do in the local maze. In my case, everything looked good until the mouse set out for a speed run and then it would just stop dead. There follows a growing sense of dread as you try to work out what has gone wrong and try to find ways to fix it. All this is complicated by the queue of similarly distressed participants waiting to get at a practice maze. Sanea-san’s comic understands all.

On Saturday the contest proper begins with the qualification runs. With so many entries, the field must be reduced to manageable proportions to create a running order for the finals on the Sunday. Freshmen micromouse entries (those who have not entered a contest before) are so numerous that the qualifiers consist of four simultaneous sets of contests run in the corners of one maze. For the classic micromouse, the top 20-25 entries are selected for the final where they join seeded entries who have pre-qualified by winning regional contests earlier in the year.

My mouse performed reasonably well even though it only did one speed run and I finished the qualifiers in 8th place. The qualifying run revealed a (hopefully) minor bug which I found and corrected later on Saturday evening.

Eating in Japan can be an interesting experience. If you have never been, you may have been told that everything is very expensive. While it is true that you can find expensive things and it is always possible to spend a lot of money, eating can be great fun and inexpensive. A particularly entertaining feature of Japanese restaurants is the variety of ways that exist to select, order and pay for your food. The University Canteen uses the ticket machine system where you put money into a machine and buttons light up to show what is available for the amount of money you have put in. Press the buttons, get your change and a ticket pops out. You take that ticket to the counter and your food is prepared right there (or brought to you at your table in some regular restaurants). If you are lucky, the buttons have pictures on them of the food they represent. At the University there is only text and beside the machines is a display cabinet with model versions of the dishes you selected. 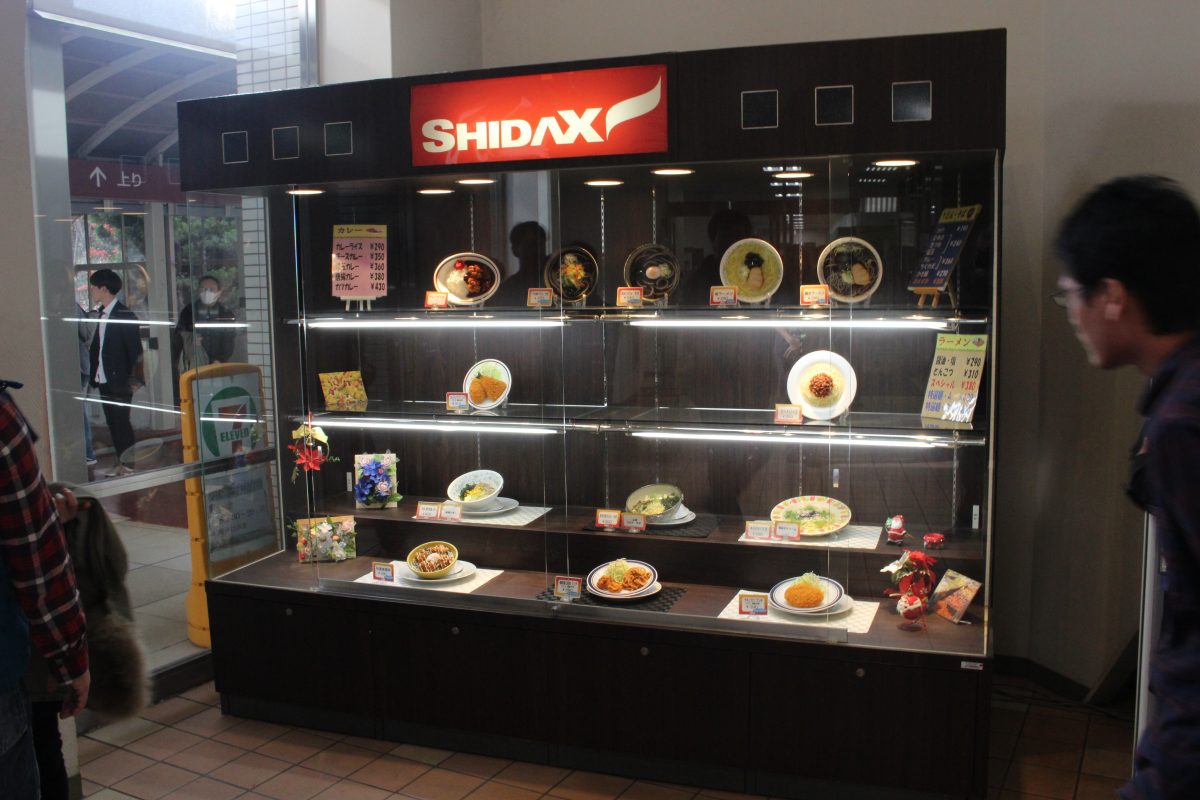 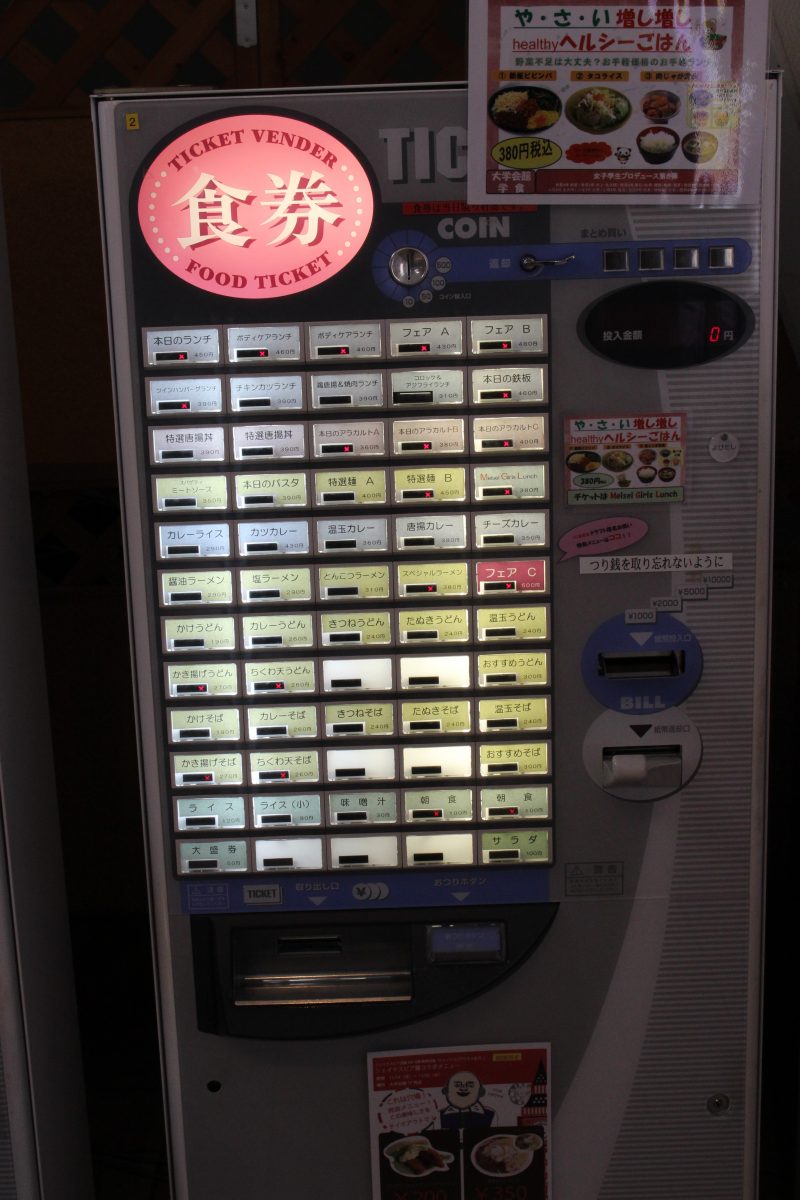 Now, with lots of choices, queues of hungry students behind you, no idea how to read Japanese and the display cabinet now out of sight behind other hungry browsers, you may just have to press a button and eat what you get. It gives the phrase ‘mystery meat’ a whole new meaning.

We decided that, for the next lunch session we would persuade one of the translators to come and help us choose our food. I did not get her name but we are eternally grateful to her for helping to make sure we were well fed. In this picture she is in deep conversation us about differences in tax rules between Japan and Singapore. Yes, tax rules. It is not all about robots – we do cultural exchange as well 🙂 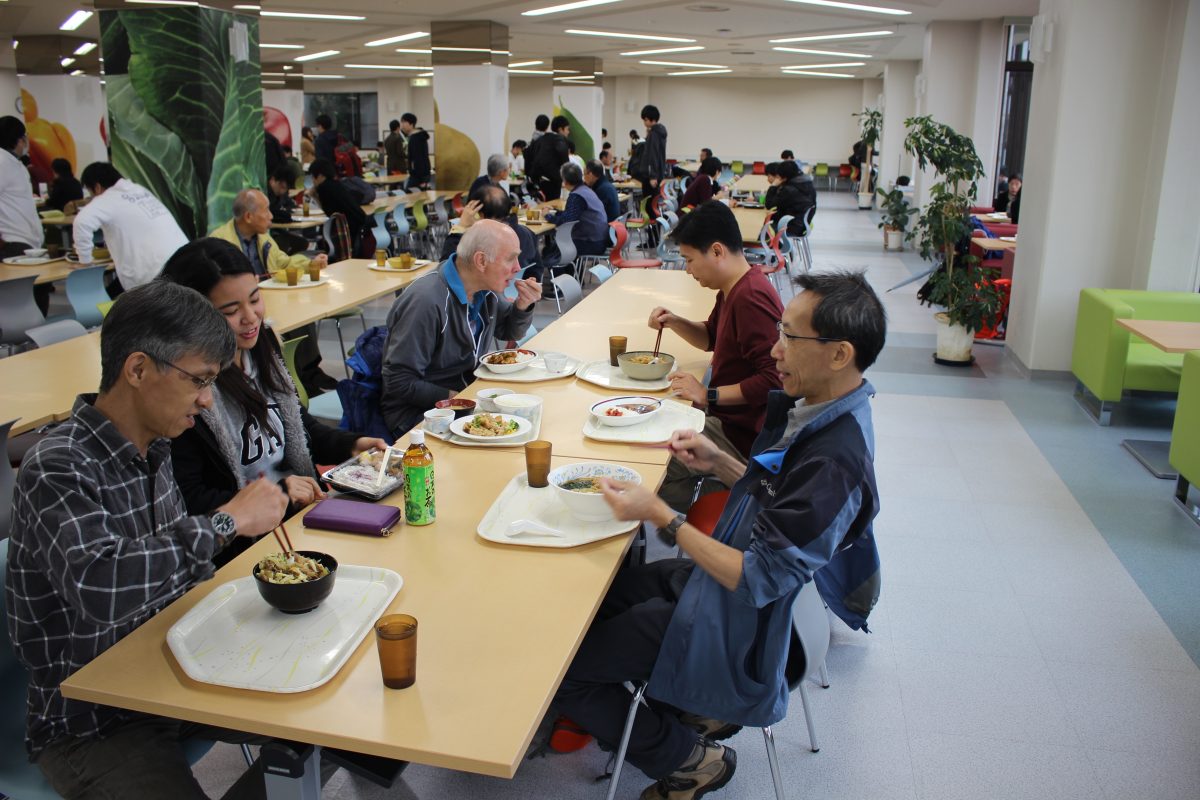 Now it gets a bit more tense. Sunday is finals day. Opportunities to test the mouse are greatly reduced simply because everyone is very focussed on any overnight changes they may have made and access to test areas is difficult with queues and time limits imposed to keep everything moving along. I had made a change to some parameters overnight and there was no practical way to find out if I had reduced the likelihood of a high speed crash until the mouse actually got to run in the final. It turns out to be the least of my worries, as you will see. With nothing practical to be done, it was best to sit back and enjoy the contests.

The Robotrace track turned out to be so long that I could not even get a decent photo of it. Before the event opens, it lies in one corner of the hall, covered in cloth. 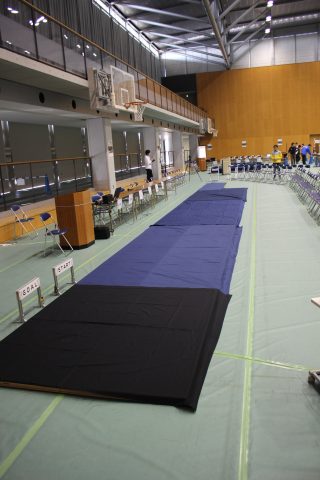 Once the grand unveiling takes place, the number of people in the audience make it difficult to get a good vantage point for a single photo. Suffice it to say that the track was about 40m long with a 14m straight after the start gate. The contest was interesting but, to be honest, not entirely exciting. One of the great things about the event is the sheer variety of robots that take part. This is a photo of the lineup for the qualifiers: 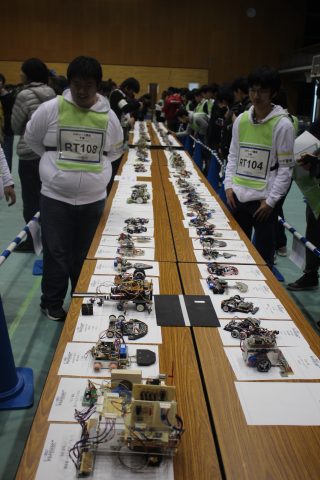 After the Robotrace event, and a lunch that we felt would not be a surprise when it arrived, it was time for the classic micromouse contest – my event.

The maze looked reasonable with many paths and a few twists and turns: 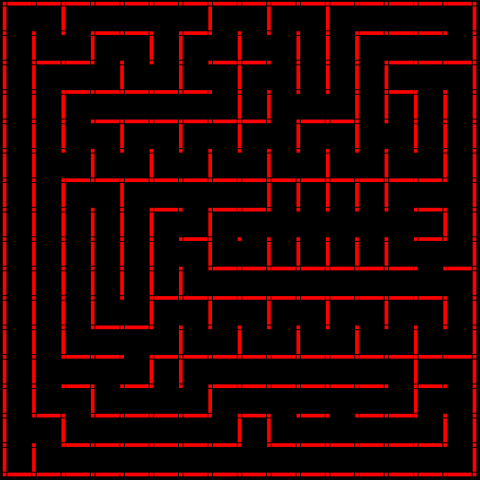 About half the entries had been run in the morning while the robotrace was still running so there were already a number of good times posted. The running order is the reverse of the qualifying event results order. that means the fastest mice run last which can build the excitement nicely. I would be eighth from last to run. However, since many of the seeded mice had already run, there were already some impressive times on the leaderboard. 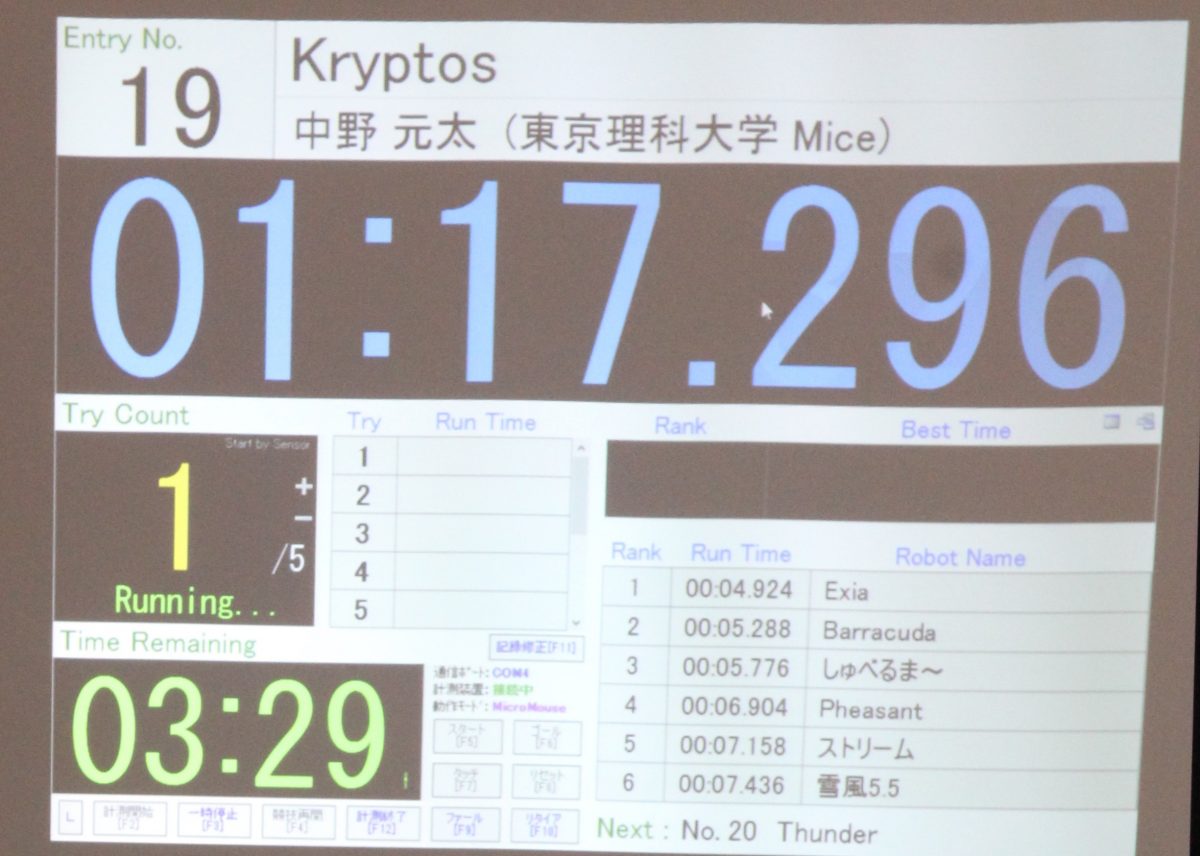 Exia is the entry from Naoto Hiramatsu. This is a mouse with a suction fan to hold  it down onto the floor with additional downforce. That allows much faster runs. Utsonomiya-san built a fan assisted mouse that changed the whole direction of micromouse building when it was the first fan-assisted mouse to win the event in 2014. Exia’s  would be a time that was hard to beat. As it turned out, they were all good times. Utsonomiya-san’s current classic mouse, Red Dragon ran second to last and put an end to Exias hopes of victory with a time that was a little faster at 4. did post a time better at 4.739 seconds. The very last mouse to run – DiuGow 4 –  just managed to beat Red Dragon by a mere 6 milliseconds on its second speed run but then went on to post two more successively faster runs to win convincingly with a best time of 4.655 seconds.

For some reason, all of the last ten or so mice to run suffered from one problem or another. For some, like DiuGow 4, these were unimportant and only prevented the mouse from returning to the start after a speed run. For others, like HIPPO C2 which was third fastest in the qualifier, it meant that it was not possible to get a speed run at all.

For me, it was all about the searching, I failed to get to the goal on the first three runs and was starting to get a little desperate. The same turn let me down each time. On the fourth run, it succeeded and gave me just one chance at a speed run which was then necessarily the slowest of my speed run options. The time for that run (7.496 seconds) was certainly not going to get me on the leaderboard. I finished 13th overall. Note that the fastest 6 mice all had suction fans. 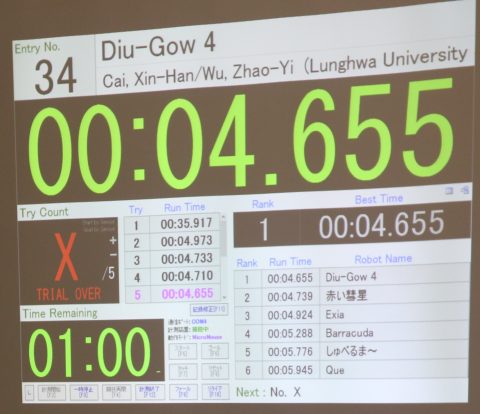 After the contest, I managed to put Decimus back in the maze and go through the speed runs. The best I could do was 6.817 seconds. That would have been enough to get 9th place and it would have been the second fastest non-suction mouse behind Beng Kiat’s Min 7. Such is the contest. No point wondering what might have been. Just get on and fi the reliability.

The half-size maze was huge. I know – but look at this: 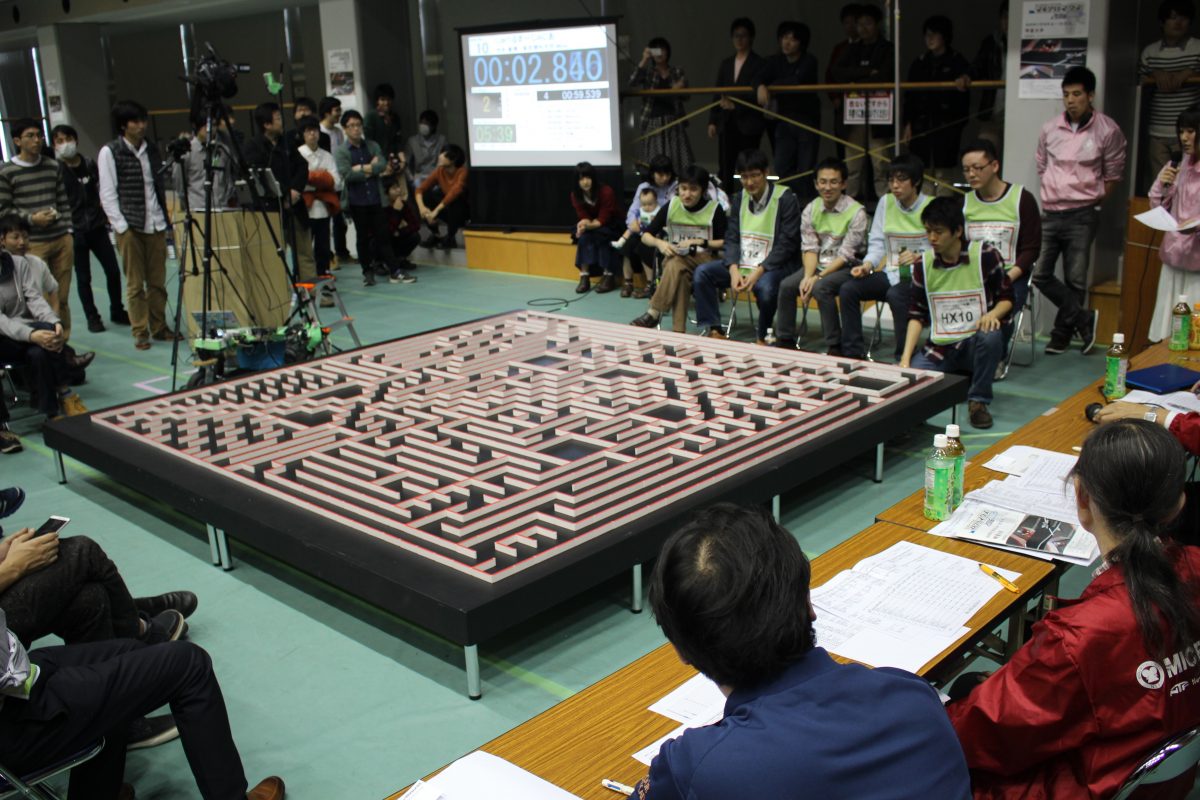 it was a complex maze with an optimal path that was hard to find. Many mice took a long time searching. You may just be able to spot a very long diagonal leading back to the goal area near the start. The fastest mice found and took that route.

It was a ridiculously exciting event.

Utsonomiya-san had a lot of trouble with his mouse crashing on the last two cells of the very long diagonal at the end of the route. He had one run left and the clock was ticking down. He released his mouse with around 12 seconds left on the clock. The mouse crashed and everyone was upset. Utsonomiya-san looked distraught. After a pause he walked to pick it up. As he did so, it freed itself and shot down the long diagonal into the goal. We all looked at the scoreboard to see that he had got the best run time of the contest by a large margin. It was also immediately apparent that the clock had ticked down to zero – apparently simultaneously with his mouse entering the goal. There was a small amount of confusion and adjudication was sought to make sure that his time was valid. It was. 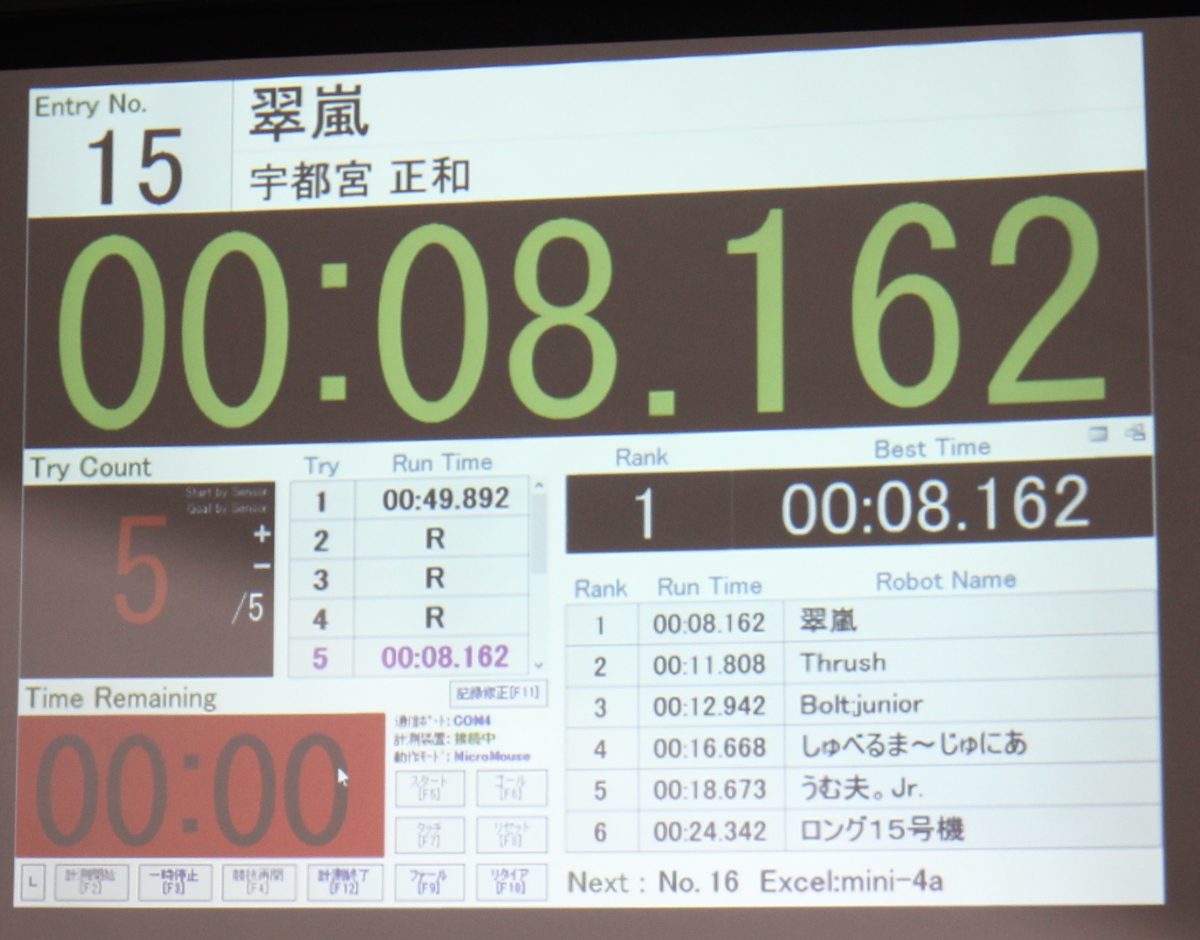 It all looked wrapped up but he was not the last to run. There were still these guys plus Matsui-san to go: 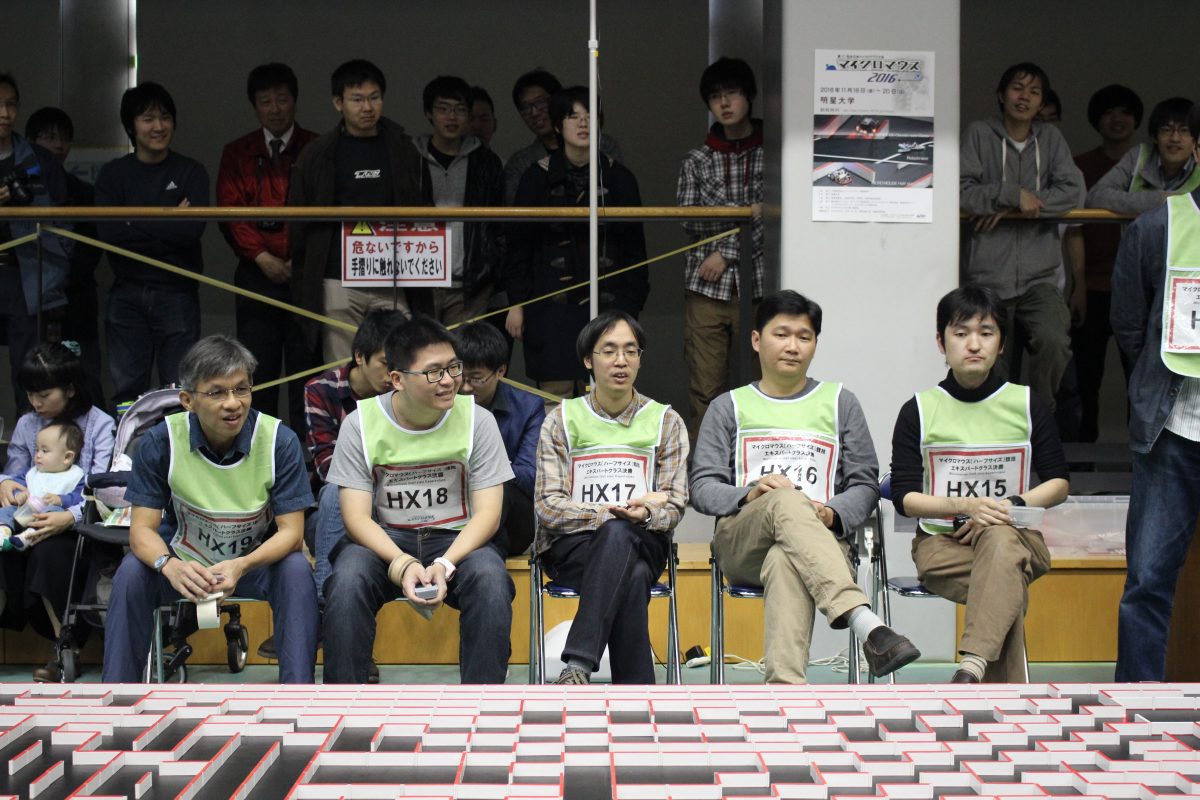 Khiew Tzong-Yong crashed out badly and did not even get to search. That was very unfortunate.

Kojima-san got a great score and wiped out Utsonomiya-san’s time by nearly two seconds to get a best time of 6.259 seconds

Next up was the Taiwanese entry, Mini-Diu-Gow. He had a troubled performance and was not in the running with only one fast run of 9.987 seconds

Ng Beng Kiat had sensor trouble and could not get speed run to complete.

Finally, it was Matsui-san as the only possible contender.

He too crashed on his first speed run but then managed 6.689 on his next speed run. Run four however, got him 5.862 to take the lead.

For his final run, everyone was chanting for max parameters.

He had already won so I guessed he hit the gas and went for it. It was all good an his final run was 5.269 seconds – an entire second faster than the runner-up and a remarkable result. (the leaderboard would not focus but: 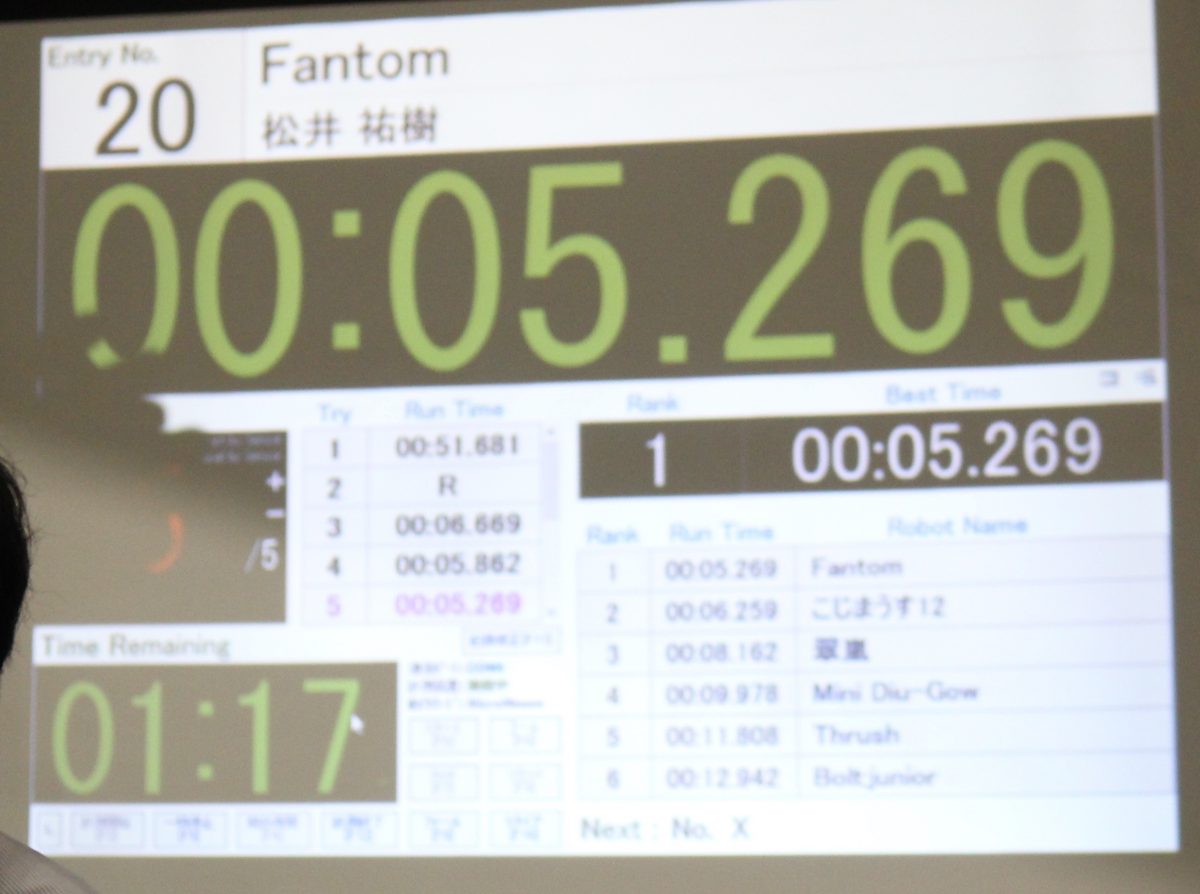 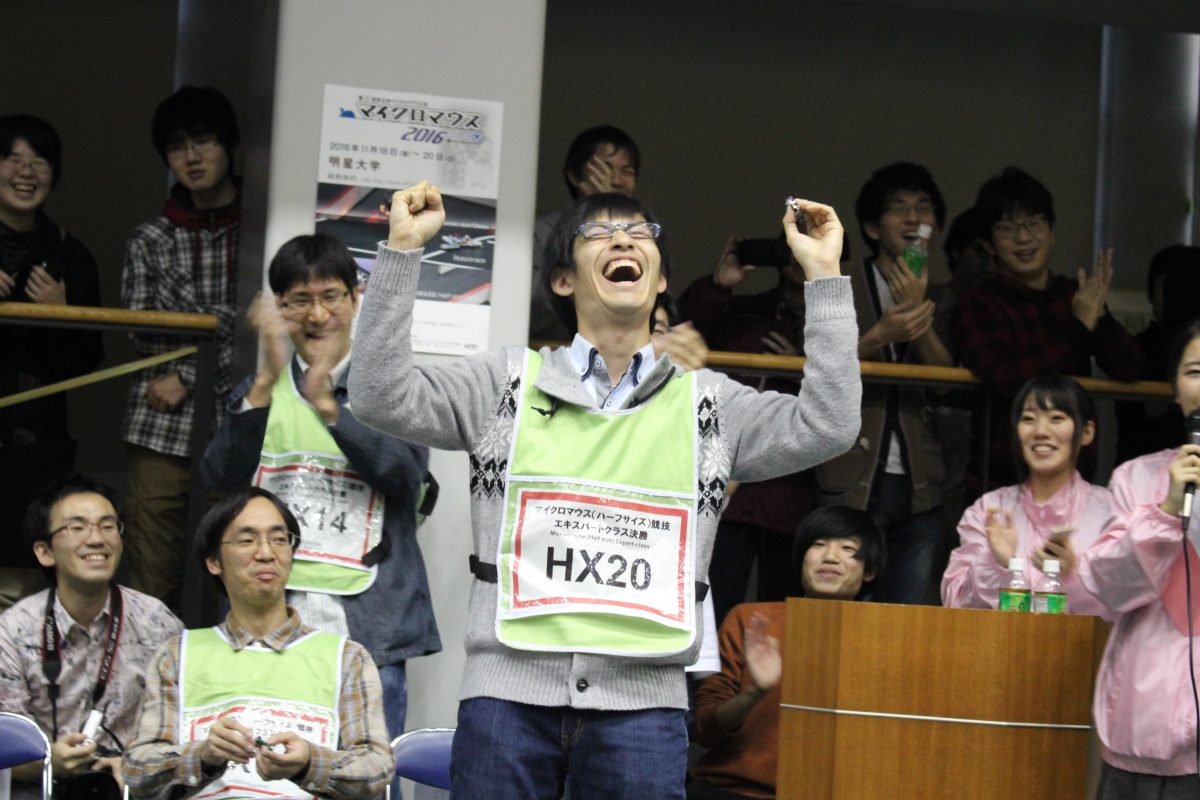 And so it was all over bar the shouting. As I write this, I am very tired and preparing to return home but I had a great weekend. thank you to the New Technology Foundation and all the staff and helpers who work so hard to make this a fantastic contest. I will leave the last word with the comic characters: 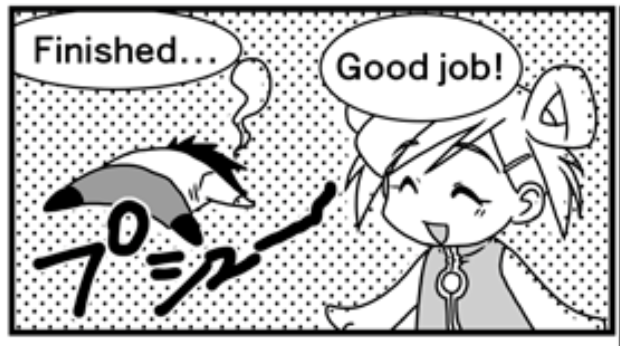 11 thoughts on “All Japan Micromouse Contest 2016”