RoboTIC is the winter micromouse event in the UK. An informal affair, it can still attract contestants from surprising distances. This year we had Coen Roos from the Netherlands who is becoming a regular. Although there was a small turnout overall – probably due to the threat of snow – we still managed to scrape together a good set of mice for the main event.

As well as micromouse, we also ran a small contest for line followers and one for non-contact wall followers. The wall followers are, in principle, proto-mice having sensors and motor control but which are unable to solve the maze or calculate a better route. However, the distinction can become a little fuzzy since a full mouse could be entered in the wall follower event with appropriate software changes. It may be time to prevent a mouse from entering both events. Bernard Grabowski put the competition firmly in its place with a very respectable time. I do not have a record of the length of the path taken.

The line followers are a very mixed bunch. This is a relatively sedate affair with a lot of scope for improvement and I rather hope we might encourage more people to try to produce high-performance followers. There was only one entry from Stephen Pithouse,  in the junior category and just four in the senior category:

For the main micromouse event this year, our maze designer was David Hannaford. Now, when I say design… 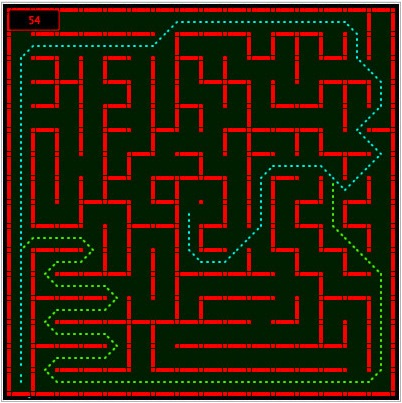 The finals maze was interesting. Mice generally managed to find the middle quite quickly but were then likely to spend quite a while exploring further to be sure of finding the shortest route. There were two main alternatives. The first, shown in blue was 54 cells long with a couple of tricky short diagonals. The next longest route was 66 cells long but should have been easier to run for many mice. Unfortunately, it was so much longer than the first route that most solving algorithms failed to find it. Unless, like Decimus 2, you put in a phantom wall that prevented you running the shorter route.

UK rules carry a search and touch penalty to encourage smarter searching and greater reliability. The scores in the results table are the adjusted times with the penalties added in.

A separate award is made for fastest run time, the results for which look like this:

After the event, the maze is reconfigured for the time trials. Here the mice get to run all the way around the outside of the maze and the shortest time is recorded. For a while, purely mechanical devices were winning this but, I am glad to say, the ‘proper’ mice are getting back their self respect. D-Whiz is little more than a motor and a cunningly shaped piece of carbon fibre that slides around corners because it has nowhere else to go.

FAB1 is Derek Halls new mouse design with size wheels. This is an extension of the four wheel design idea and promises no loss of traction as well as a egree of self-steering when accelerating and braking in a straight line. The middle wheel is arranged a millimeter or so lower than the outer wheels and the center of mass is over the middle axle so that turning is pretty much the same as for a more conventional two wheel design. In its current configuration, it has only one active sensor so that it can steer down a straight and detect the corner for the turn in the time trial.

Derek’s six wheeler, FAB 1, managed the time trial – a complete run around the 64 cell periphery – in an impressive 5.61 seconds. It is only using one sensor for steering off the inner wall. By my calculation, FAB1 will be accelerating at a little under 7m/s/s with a top speed of 4m/s. That is pretty quick and could present some really stiff competition next summer.

Star of the show this year was probably Tim Foden with FatCat. Tim is a relative newcomer to the micromouse contest but, at his current rate of progress, it won’t be long before he starts to challenge for the top spot. 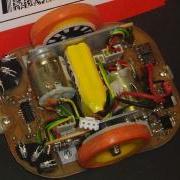 Here are the vital statistics for this mouse:

The encoders are pretty remarkable. Note that the mouse has very inexpensive motors which do not have encoders. Tim has build very simple encoder discs which give an approximately sinusoidal response to the reflective sensors mounted on the encoder boards. The small PIC24 processor on each of these, reads two such channels for each encoder. These are arranged in quadrature so that it is possible, by simple trigonometry, to determine the absolute angle of the shaft holding the encoder discs. This is exactly the technique used by the AS5040 magnetic encoders but this is a (very effective) DIY solution. The job of the PIC is to turn the reading into counting signals for the main processor. In this way, the main processor can treat the encoders exacty the same as any other digital encoder. Should Tim change to AS5040 encoders or the vastly more expensive Faulhaber/Maxon motors with integrated encoders, the basic software in the mouse will remain the same. This arrangement, while still needing some tuning, manages sub millimetre accuracy and allows the mouse to calculate its position and heading wherever it is in the maze.

Thus far, FatCat can only turn in place but, as soon as Tim has implemented smooth turns, I expect he will be able to put in very fast times with quite inexpensive hardware. This year, he was awarded a prize for best new mouse.