I missed discussing a couple of items in the last post: How are we going to attach the motor/axle brackets to the board and how do we handle the gap between the hub/gear and the bracket. Our original thought was to reduce mechanical complexity of the bracket, we wanted to support having axles that go between both brackets on the mouse.

This gives the mouse some torsional rigidity since we have a big cut out in the board and the board is 0.8mm (0.031”) thick. During the PCB layout, it became clear that the axles would push the batteries further out. This then pushed connectors and the four character LED further out. So, Pierre and I decided that the axles would not go across and instead we would use half-shafts. To make the half shafts more robust, we wanted material in the bracket for them to attach to. So, to eliminate one machining step, we decided that the ears to mount the brackets to the PCB would be on the same side as the half shafts and that way Pierre can machine the half shaft mount directly into the bracket. Since this is a four wheel mouse, the bracket is really long and the mounting ears have to reach around the cut out in the board. This actually helped reduce routing constraints around the cutouts but it also meant that if we wanted to try different gear ratios or wheel/tire diameters, our choice would be limited. Compromises, compromises, compromises…

If you look at the photo below, the bottom left of the left bracket shows how we would capture the half shaft and if we wanted to use an axle, that we need a small spacer. The upper left shows how, if we had used an axle, we could have grown the hub/gear assembly to come all the way to the bracket. 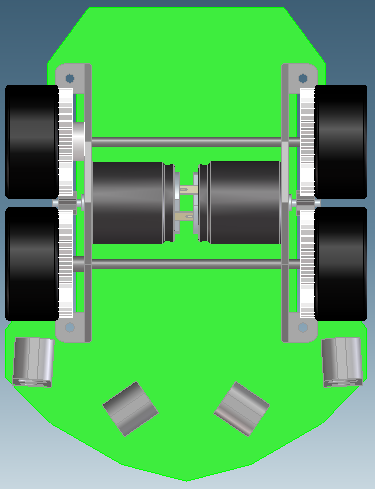 Now that I have the mechanical design done, I started focusing on the electrical design. ZV uses a four layer circuit board which pays attention  current return paths, has multiple dedicated voltage regulators and high precision voltage references for minimizing the noise for the sensors. Given the space limitations, I decided to use LC filters instead of dedicated voltage regulators/references. I really struggled with whether I should include a beeper and four character display or not because of the space they take. In the end, I decided to include them. I haven’t really been able to use these two very effectively so far and if I don’t soon figure it out for ZV and ZVI, I’ll be removing them.

The benefit of using the smaller 64pin QFP for the STM32 is that it reduces the amount of support components i.e. Rs and Cs. I thought about changing the JTAG port to the single wire implementation but decided to stick with the five wire soln. that I use on ZV so that I can continue to use the same debug HW for both ZV and ZVI. Since I wanted to be aggressive about reducing the number of capacitors, I spent some time looking at high value ceramic capacitors. One item that was surprising  was that if you bias them at “high” voltages, the capacitance drops quite dramatically. For example, a 10uF, 6.3V ceramic cap’s actual capacitance when used on a 5V rail is only 2uF! I found that I was better off using a 4.7F, 10V ceramic cap. because it would be 3.2uF across a 5V rail. I think a better bet would be a tantalum capacitor. I decided to use ceramic capacitors even though they have a lower capacitance because they have lower ESR.

As I was placing the parts, I took a close look at the connectivity and it became pretty obvious that I could do the layout in two layers, instead of four, and not (hopefully) sacrifice any noise performance. I went ahead and did the placement and layout with this in mind and besides a few routing congestion issues, didn’t run into any problems. I ended up placing all parts on the top layer and using the bottom primarily as a ground layer. When I get the board back, I’ll know if I succeeded in achieving the same level of noise on ZVI, a two layer board, as ZV, a four layer board.

To make the board easy to produce, I use 0.2mm traces with 0.2mm space, vias with 0.3048mm hole and 0.6096mm diameter. When it came time to order the board, I sent the files to many different board vendors and their response is shown in the table at the bottom of this post. Some prices were received by email and some were generated by their web based costing tool.

After doing some internet searches, I decided to order the board from PCB Cart. I know of a competitor who uses OurPCB. Please note, I’m not associated with any vendor and I’m not recommending any of them either. Please do your own research to determine who you want to use.

Here is a picture of the board – the red is the top layer and blue is bottom layer. The bottom of the board shows four sensor boards that I added to the bottom so that I wouldn’t have to order another board. I’ll cut them off myself. The actual bottom follows the blue ground pour. I’ll post pictures when I get the boards back. 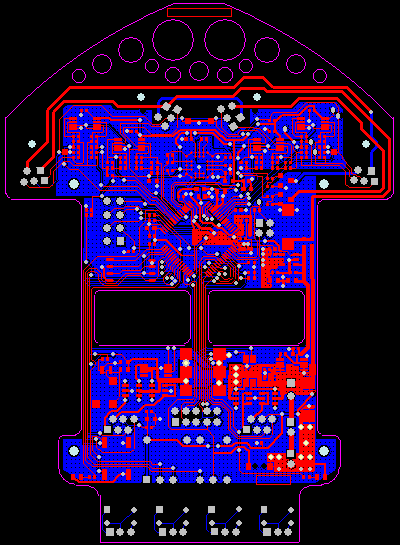