Friday is practice day. Well, half day would be more accurate. In the afternoon, the venue is open and the mazes and practice circuits are laid out for anyone to test their robot’s basic functions. Everyone is busy setting up, making sure things work as they should and getting a good look at the other entries. Since we had the morning spare, we went an watched the Real World Robot Contest first…

After the qualifying session on the Thursday, we were down to, I think, about 35 entries for the final. A healthy session of speeches got the event off to a good start and the onlookers gathered around the start gate for the first robots to set off. The course runs over 1.1km and includes a couple of interesting challenges on the way. The departure of the first robot immediately cleared the crowd somewhat as people began to follow its progress. We hung around a while to see more starters and to let the onlookers dissipate a little more. Robots are released every five minutes and speeds vary a lot so it was not long before there was an early overtaking opportunity to watch.

The robots expect to encounter obstacles. They can expect those obstacles to be moving. What is seemed they might not have expected was for the obstacle to apparently be running away. Mostly, the robots will follow essentially the same path and deal with obstacles as they find them. When you come up behind a slower robot, it will be moving away from you. Now that is a bit of a problem. Overtaking requires considerable forward planning. In an open environment, it would be easier but how could the robot know what is the other side of the one ahead. It is just like driving behind a slow lorry in fog. What to do? At intervals around the course, there are places where the robots are compelled to stop for traffic or pedestrians. These places seemed to be the only real overtaking opportunity for many robots. In lots of cases, the slower robot was on a different path or would stop for its own reasons. Then it was easy enough to get by. 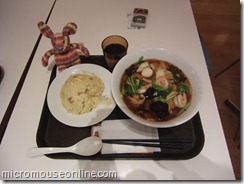 After lunch in the food hall at the bottom of Q’t, it was time to head over to the Capio building to see if the mouse would work. This year, I have two – Decimus 1 (D1) and Decimus 2 (D2). D2 is a simple evolution of D1 and it won the UK contest in June. In spite of spending a lot of time on new code in the autumn, that didn’t work out so it will run from the same code that it had in the summer. I probably won’t invest more time in the codebase for these mice and will instead concentrate on the new mouse using  the STM32 processor.

First job is to test the sensors. D2 has an elaborate calibration method that I now greatly regret and it took several attempts to get consistent setting. It is still over sensitive and will probably need adjusting again tomorrow but, for now it will have to do. D1 gave me odd results which turn out to be a dry joint on a component almost buried under the light shield. This had the effect of killing the left diagonal sensor. After a hunt around, I found a kind soul who let me use a soldering iron and I did what I could but I may simply have pressed it into place rather than fixing the joint. There is no way to know so it will have to run as it is.

All this took so long that neither mouse has had the chance to do a full run. Tomorrow will be really busy and there is no access to the full-size maze so I will just have to hope for the best. All this messing around also meant that I did not really get a chance to look at many other mice. However, some stories filtered back and here should be some really interesting stuff about tomorrow.

The Saturday session is qualifying. Only the top 20 (I think) mice go through to the final along with those that have qualified by virtue of being winners in the regional contests. With two mice to run, I shall have to keep my wits about me as they are not likely to be run sequentially. On the other hand, I have it easy. Beng Kiat has two of everything it seems. Two classic mice, two half-size mice and two line followers.