Good, free running wheels are an essential part of the drive train on your micromouse. Not only is there little point in wasting power driving inefficient wheels but it is important to make both sides as similar as possible to avoid any natural tendency to wander off to one side. After several unsatisfactory attempts with screws and nyloc nuts, I decided to make some stub axles and glue everything together.

The drive wheels have hubs that contain three bearings. Two flanged bearings fit on opposite sides and a non flanged bearing sit between them. The idea is that the inner races of the bearings would take up any axial load as the screw that formed the axle was tightened up. There are two problems with this arrangement.

First, almost any axial load causes drag. Getting the right spacing is very difficult and so the axial load is hard to adjust and even harder to make the same on each axle. With four axles to worry about, it was impossible to match it all up.

Second, the screws used as axles were plain M3 machine screws. They have an outer diameter of anything between 2.8mm and 2.9mm so they are a relatively loose fit inside the very close tolerance bearing inner races.

Adjusting out these issues was too much like hard work. The only advantage I gained would be the ability to remove the wheels and then, if I did that, I would be faced with the joy of getting it all adjusted again. 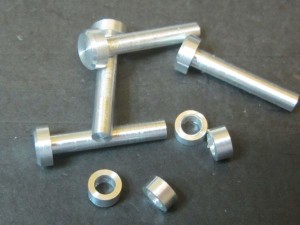 The axles have an outer diameter of 2.95mm and are a comfortable fit in the bearings with a little room for a small amount of low-viscosity cyanoacrylate glue. These axles fit through the motor mounts and have a large bearing surface on the inside to keep them stable in the relatively soft material the mounts are made from. The axles are glued into the mounts with the same thin superglue.

With the bearings fitted into the wheels, a small amount of glue is applied to the axle close to the mount. Only a tiny amount is needed – use a pin or cocktail stick. Since this stuff has very low viscosity you really don’t want a surplus that might flow over the inner race of the inner bearing and glue it up. That would wreck the bearing and be very difficult to remove. Also, the glue hardens quite quickly so rehearse your moves and work quickly but carefully. Practice on spare parts first.

Once the wheel is mounted on the stub axle, it should turn very freely with a small amount of play at the outer end. It will be difficult to remove now since the innermost bearing is a tight push fit on the wheel and is also glued to the axle.

The stub axle was made with 3mm protruding from the outer face of the outer bearing. Over that end a 2.5mm long retaining collar is fitted. The collar has an inner diameter of 3mm and an outer diameter of 4.8mm so that it bears only on the inner race of the bearing. When fitted, the collar it a loose running fit on the axle. It is pushed down on the wheel bearing hard enough to take up any end float (slack) but not hard enough to cause any drag. A (small) drop of glue on  the end of the axle will allow it to wick into the space between the collar and the axle and hold the retainer firmly in place. It is fine – actually it is good – if the glue wicks down along the axle to the wheel bearings so long as it cannot get into the bearing races and jam them up. Too little is better than too much or you may find you have to throw the whole lot out. In the extreme, the glue bond can be softened by heat and cyanoacrylate glue dissolves in acetone. Neither approach is likely to do the bearings and/or the wheels any good.

The end result is neat and tidy. It does not need any adjusting and should be permanent. If the retainer should come loose, it would only take a drop of glue to hold it back on. Then again, a crash big enough to shake that loose may have done more serious damage elsewhere.

After fitting these axles, Decimus can travel in a surprisingly straight line with the same PWM applied to each motor and the controller turned off. Previously, it would want to turn left all the time – as much as 200mm in 1500mm of travel.

For those of you with better machining skills than me, a better solution would be close fitting axles and a e- or c- circular clip in a groove on the outer end of the stub axle. This would be removable but your machining tolerance would have to be better than I can be bothered to maintain. A CNC lathe would make it relatively easy to produce a batch of these. But I don’t have one. Yet.

4 thoughts on “Stub Axles and Superglue”