This was the first occasion that UKMARS was able to hold a micromouse competition using its own mazes and tracks and included for the first time an 18×18 cell half-size maze. The full-size maze was built by Duncan Louttit with assistance of Bernard Grabowski. The half-size maze bases were also provided by Duncan with the walls and posts churned out by Bernard using his 3D printer. The timing gear was provided by David Hannaford and Ian Butterworth for the full-size maze events and Duncan Louttit for the line follower and drag events.

Medals were presented to the owner of any mouse that successfully completed the course in each of the events and a trophy was awarded to the winner of each event. These were donated by Duncan. A prestigious “brass cheese” trophy was also awarded to the winners of the Senior Maze Solver, Wall Follower and Line Follower events. These were manufactured and donated by Alan Dibley, one of the pioneers of UK Micromouse, who announced his retirement from competition. We will miss his insight, advice and his dry wit.

A total of 18 mice were registered for the senior events. Four mice, each capable of being configured to compete in three different events were entered for the junior competition.

On the face of it, this years maze was quite simple. Certainly simpler than intended since it was variously altered during practice by the competitors. Still, we are a friendly event so it was fine in the end. Well, I say it was fine. Several mice had trouble with the long straight along the top of the maze. This is a classic problem whereby the mouse has not travelled as far as it thinks it has and turns too soon. A few years ago, the Japanese contest maze appeared to have been deliberately designed to catch this error – with a lot of success. 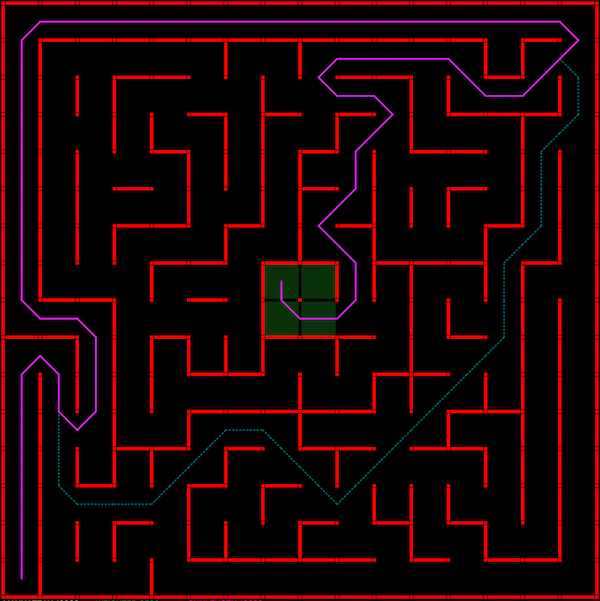 There were only two likely routes. The upper, magenta route was about 10m long and the lower, green route was about 9.5m. Decimus took the upper route since the solver can identify the long straights.

It was a small field this year and the results were:

Footnote by PH: Decimus 5A made very hard work of solving this maze. It took nearly 65 seconds to find the goal. That is pretty unacceptable in competition and I will have to look into why. FAB1 found the goal in only 19.46 seconds and may have won if it could have managed a successful speed run straight away. I look forward to some video to see where my search went wrong. After that though, speedruns were almost an anticlimax. The new maze clearly suited Decimus 5A since it ran at it’s maximum speed setting with no obvious errors. Unfortunately, I cannot tell how fast that was because the timing system had broken and the mouse internal logs ran out of space. The best recorded time for D5A was 4.182 seconds.

Three runs were permitted allowing “intelligent” mice to learn the course to run slowly in sharp corners and then speed up in the straights. The track was newly built by Duncan to a design where small sections slot together in a large number of combinations so that the course can be different for each competition. It is intended to add more sections each year so that the size of the track can be increased to give more incentive to competitors to design and build “intelligent” mice.

There were just two entries in this category so no time trials or heats were necessary.

It would be nice to see more entries in this event which needs a mouse with good reliability as well as pure speed and can reward fast reactions in responding to the countdown on the start line.

Footnote By PH: As a reminder, the drag race is simple sprint by a line following robot along a straight track. The total track length is 7.2m and the finish line is at 6m. The robot must come to a halt within the 1.2m overrun area. I point this out so that you can appreciate the performance of these robots.

Suppose that, after the reaction time, the actual time taken for ‘Missile’ to traverse the 6m course was 1.5 seconds. Suppose also that it starts at finishes at rest and travels only 6m and that acceleration and deceleration are the same. After 3m, the time taken would be 0.75 seconds and so the acceleration must be 2*3/0.75/0.75 = 10.7m/s/s. At the half way point, the robot will be travelling at sqrt(2*10.7*3) = 8m/s. These are impressive figures so, if you want to design a Drag race robot, keep these parameters in mind.

The first and second placed mice both beat the best time posted by a senior in this event.

The winning junior beat the senior winner’s time over the same course.

This event was conducted as a knockout competition with mice seeded according to their performance in a time trial. The fastest run time recorded was 2.501s by the winner. The best reaction time was 0.369s also by the winner.