Saturday is qualifying day for the All Japan Micromouse contest. Year on year, the contest continues to grow and the challenge is ever greater. Find out who gets through to the finals here.

I arrived this year with Decimus 4E. Another upgrade to the same basic micromouse chassis that I have been using for a couple of years now. This time, the sensors have been re-aligned, all the turns re-configured to be faster, the searching algorithm has been replaced to make it more thorough while taking less overall time and the shortest path finder re-written to be more intelligent by looking for runs that are faster even if they are a little longer.

Practice on the Friday was very scary. First, I could not get the sensors to calibrate. This turned out to be because I had been more clever than I expected by providing several different ways to do the calibration. I forgot that and kept picking the wrong one which left my mouse wandering all over the place.

Then it would just not turn and crashed at the first corner while searching. Sleep deprivation and nerves do not make for good analytical thinking and it took me more than 30 minutes to find the cause. Time was critical because we had arrived for practice early and had good access to the maze. It would not be long before it got busy and serious work would be difficult.

The problem turned out to be simple and, again, of my own making. On the flight over, I was looking over the mouse code and having a bit of a tidy. I removed old comments, re-wrote others to make them more clear, formatted some badly laid out code and removed old, unused code.

That was the problem, right there. I had removed a single line of ‘obviously’ redundant code. Except that it wasn’t. Thanks to the magic of the git revision management, I could go back, find what I had done and set it right. After that, everything went really well and the ouse ran around safely at it top possible speed. I decided then to leave it alone for fear of making something worse.

On Saturday, I got my turn to run in the qualifier.

There was a problem with one of he turns that mysteriously runs fine at top speed and low speed but not at the speeds I tried in the qualifier. That lost me two runs before I backed off to a lower speed setting.

Another problem emerged because of a feature of the Japanese mazes that I had forgotten about. There is no post in the centre of the maze and so my mouse did not perform its final turn. Instead, it blasted through the finish gate and just carried on through the goal until it crashed. The score still counts so it is not a disaster.

In the end, I got a good time and finished in fifth place overall. Very happy with that but tomorrow all the seeded mice are added to the fray and things get much more difficult.

Here are the results: 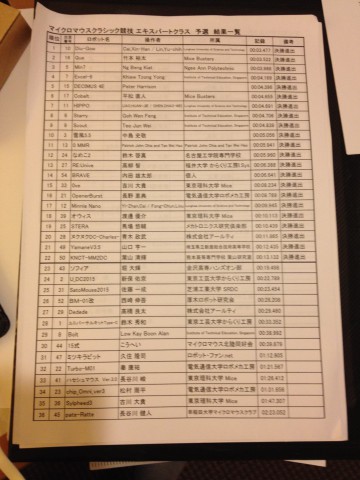 and this was the maze: 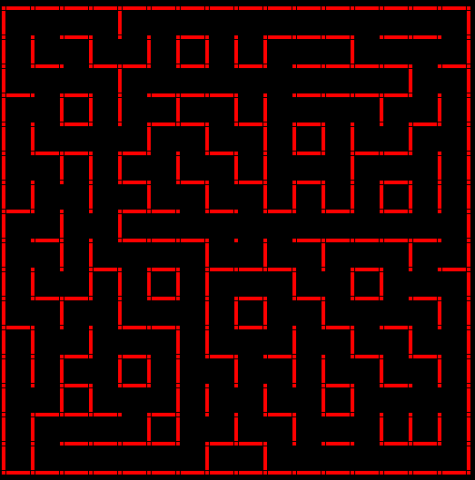