This is where the fun really begins. Contestants arrive for qualifying day at the All Japan Micromouse Contest. One contest will be decided completely today, the others have a qualifying phase which determines who goes through to the final tomorrow…

The action takes place at the Capio – a spacious and well-equipped venue in the middle of TSukuba. Several contests are staged this weekend with a large number of machines entered. The obvious focus will be the micromouse in various forms but there is also the Robotrace line follower contest and the microclipper event where micromice are fitted with gripper arms to manipulate cans placed in the maze.

The micromouse contest is made up of several classes. The freshman class is for ‘beginners’. I believe this to mean entries that have not won any other event. In that class this year, there are 121 entries. With each being allowed 7 minutes, it takes all day to work through the contestants – even with a second maze opened up in the afternoon. This class runs straight through with the winner being decided on the day. Results and maze details for this and the other events should become available at the end of Sunday.

The micromouse classic expert class is where I was entered. This had 75 entrants chasing perhaps 16 places in the final on Sunday. As well as the runners today, a further nine mice had already qualified by winning regional contests earlier in the year. The classic event runs on two identical mazes at the same time to get through the number of entries in a sensible time. With several mouse builders entering more than one mouse, the organisers try to arrange for the double entries to run at different times. It can be quite tricky to keep track of what is going on. I forgot to put my mice through scrutineering. Here they verify that it is within the size constraints and photograph each mouse – probably to ensure that each entry really is a unique mouse. As it approaches your turn to run, you have to join the queue on the seats to one side of the maze and shuffle along until it is your chance to have a try. 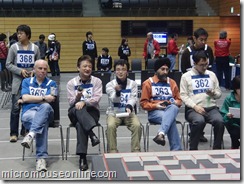 Each contestant gets to wear a tabard (bib) with their entry number on it. This is really helpful since you can tell at a glance where your are in the running order and not all of the entrants speak Japanese. Because of the language difference, it is important to watch very carefully what is going on. Again, this year, I managed to infringe some rules. First by not indicating to the judges when I wanted to take a crashed mouse out of the maze and then by not understanding that lifting the mouse out from the start cell counts as a run. There are only five runs allowed and I used two just by picking up my mouse to see why it would not start. All this was explained to me by the announcer who had very good English and acted as interpreter. 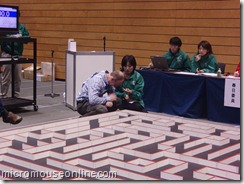 As it turned out none of this made any real difference for me. The problems setting up the mice on the previous day proved too much. D1 seemed unable to see walls ahead and kept driving into them so, after three runs, I retired gracefully. When Decimus 2 had its turn on the other maze a little while later, things looked a little better. D2 has a modest explore speed and, other than one narrow scrape made its way confidently to the goal in about 1 min 16 sec. So that was the first hurdle over and a great sense of relief. After reaching the goal, D2 will explore the rest of the maze until it believes it has the shortest route. Here is here it went bad. In the far corner of the maze, near to the route it would have to take, D2 failed to detect a wall. After hitting the wall, it carried on for a few cells but then stopped. If I were more alert, I would have recognised the symptom but it didn’t register with me at the time. I remembered, this time, to signal appropriately and collected the mouse to do a restart.

After placing the mouse in the start square, I signaled and pressed the appropriate buttons and … nothing. Another quick press of the buttons and still nothing. I was really puzzled by then. One of the key indicator LEDs had not come on so I picked up the mouse to see better. Nothing. Put it down and try again. Nothing. Getting panicky by now, I picked up the mouse once more thinking there must have been a major failure. At this point, I had my little instructional chat from the charming announcer and was told that I now had only two runs left. This break in my chain of thought let me realise what must have happened. After the contact, the maze must have had an extra wall added in the vicinity of the route to the middle. In the far corner was a couple of cells that both routes had to pass through. With an extra wall here, there was no route and D2 is programmed to simply stop moving if it has no route. Once I realised that, I cleared the maze memory and started again. With only two runs and not much time left, I would have to explore to the goal and hope for one fast run. The first part of the plan worked very well. D2 repeated its exploration in the same time and set out to find a better route. The second part of the plan failed right there as D2 hit the same wall again and walled itself in. There was no point in continuing so I retired.

All this made me think again about different strategies. One option suited to the Japan rules is to explore to the goal and stop. You can retrieve your mouse with no penalty and take it back to the start. Now it would be possible to do a speed run with the route that you already know exists and then look for others. This would have got me one fast time.  Such a strategy is open to abuse though. If you can see that the mouse has already found the optimal path, it could be told not to do the subsequent exploration and switch straight into speed run mode. It is common to see Japanese contestants change setting on their mouse between runs.

It also occurs to me that the mouse should never add a wall to a cell that has already been visited and confirmed. I don’t know if it would have helped here as the mouse was probably lost by the time it made the error.

My fellow travellers, Harjit Singh and David Otten fared rather better I am very glad to say. Harjit had been working really hard on his mouse – Zeetah V, literally up to the last minute. This is normally a good way to be sure of disaster but Harjit is very good at what he does and he was rewarded with a good run to the middle and a recorded time of about 55 second. This was his major goal and so he was not too upset not to have been able to do a speed run although I am sure he will have asked himself , as we all do, what if…? I will leave Harjit to write up his own experience if he wants to. 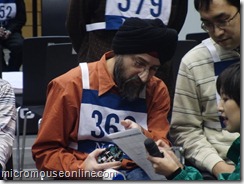 Dave Otten’s mice, MITEE 11 and MITEE 13, were the solid, smooth runners we expected to see and performed very well. I understand that M11 has run here a number of times before but M13 is brand new and running in its first contest. If you enter multiple mice and both get times low enough to qualify, you may be asked which entry you would like to have run in the final. Dave chose M13 because it is newer. An inspection of the scores showed that both mice got best run times within 20ms of each other. They are very different so this was quite surprising. Anyway, Dave is through to the final and Harjit and I will be keen observers. With nothing else to worry about, we can concentrate on enjoying the show. 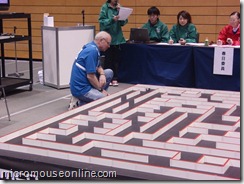 What with trying to keep track of what I had to do, there was not much chance of following the other contests but tomorrow, I hope to be watching carefully to see how everyone does. We get to see the pre-qualifiers like Kato-san for the first time and, from the odd bits of runs I have seen, we should be in for another exciting final.

As well as the micromouse classic, the other events should be pretty interesting. There are signs that the line follower designs are beginning to converge to a more common format and there are some really remarkable half-size mice. The lightest of these weighs only 11g. That is one tenth of the weight of D2. I will also have some details of a remarkable vision guided mouse.