Finally, an official qualification run on a full size maze… 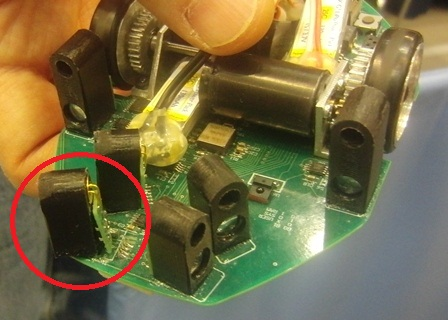 The rest of the time at the contest was just great because I could enjoy it as a spectator instead of having to deal with the pressure of being a contestant. The entries were just unbelievable. Peter has a great write up.
The official results are out and can be found at the  New Technology Foundation Site

The New Technology Foundation, the folks that put on the contest, record the event and I believe even make a DVD. However, none of us from outside Japan have been able to figure out how to get a copy of the DVD. If you have any leads, please do share.
Pictures from Peter can be found at my Office Live Site

There is also a set of split zip files of video of ZV running in the qualification round.
Monday 11/29
I’m hoping to come back to the contest next year, so I wanted to become more familiar with the logistics. I found an ATM machine and withdrew some money. When I got back to the US, I checked and the conversion rate was about the same as at the airport.
On Monday, Peter, Dave and I met up with Lem Fugitt from http://www.robots-dreams.com/micromouse/ in Akihabara. Lem is incredibly knowledgeable and he gave us a guided tour of the area – we would have seen less than ¼ the things we did without him. It is just amazing how much robotics activity there is in Japan. As we were wandering around, we ran into Khiew Tzong and a few other folks.