I didn’t get much sleep at all on my first night in Japan. Or any of the others in fact. Probably over-excited. the view from the hotel room was pretty good what with the rocket, the planetarium and Mt Tsukuba all beautifully lit by the rising sun. Having missed out on the Akihabara experience on the day before, I resolved to take the Tsukuba Express and have a look this morning…

The shops generally don’t seem to open until 10am so there was no huge rush and I got a return ticket on the limited stop rapid train just after 9am. These trains go from Tsukuba to Akihabara and are, apparently, fully automatic with no driver. They run avery 5-10 minutes and even the slow, stop everywhere train is pretty quick. Quick enough that there is not much point in waiting for a fast train. Just get on whatever one is there. the journey is about 50 minutes so you might want to wait for a train with a seat. One of the first things I noticed when getting out of the station at Akihabara is just how many luggage lockers there are. It would have been no trouble to leave my luggage there after all. If you take into account the average waiting time for the bus from Narita to Tsukuba, There is some possible merit in taking a train from Narita to Tokyo, making your way to Akihabara and getting on the TX to Tsukuba. Journey time may well be much the same and the cost is about the same. 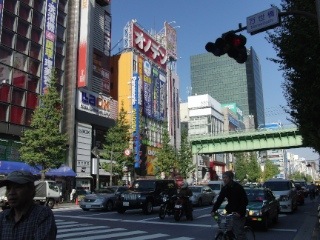 It is surprisingly difficult to adequately describe Akihabara. Most notably, it can be loud and very colourful. There are huge electronics stores with a bewildering array of goods. At its worst this is simply overwhelming. People stand in the street with signs trying to attract you inside. When you enter the store, you can be battered by more sales people every couple of yards trying to demonstrate stuff, there are large colourful signs everywhere and, to top it off, a loud PA system constantly telling you (I presume) about this or that offer. The Akihabara maids are legendary but I found myself strangely inhibited about taking any pictures. Perhaps it is an English thing? Look them up for yourself. After a while, I found the remnants of the original Electric City. This is a large number of small stalls under the railway line where you can buy almost any kind of component. I can’t see how they can be making money. This was a Saturday, there are lots of stands – many of them very specialised – and not enough trade as far as I could see. the specialism was impressive. You could find a stall with nothing but LEDs on it. Next to that was another stand with vacuum tubes and next to that was almost solely heat shrink tubing. 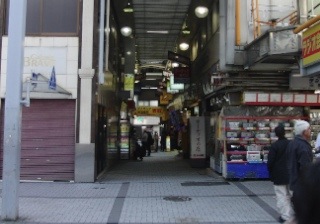 Overall, I was also struck by the fact that many items were quite expensive. Common components seemed acceptable but I found a stall selling machine tools for surprisingly high prices. The ubiquitous mini-lathe was offered at $1,000. This is three to four times what it sells for in the US. I contented myself with a few small components and a couple of extension and power leads that I would need later for charging the mouse and laptop batteries. After making a bit of a spectacle of myself by eating my lunch while sat in an empty shop doorway down a small side-street, I made by way back to Tsukuba for the afternoon practice session. 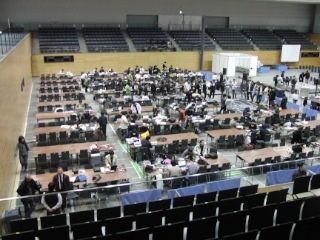 The contest was held at the Tsukuba Capio which has an impressively large arena. I met up again with David and Harjit and was introduced to Joseph Chiu and his wife, Michele. Joseph was a contestant way back when the first competition was held in Tsukuba. The venue was very lively and contestants were busy tuning up their robots on the several mazes and tracks available to them. It was fascinating to see so many devices and so much activity. I soon managed to find other faces familiar from Taiwan and it was good to be able to meet up again and say hello. i think it would have been pretty overwhelming to have taken part not knowing anyone. I was relying on Dave’s experience and excellent guidance to make sure I didn’t break any rules and could understand what was going on. 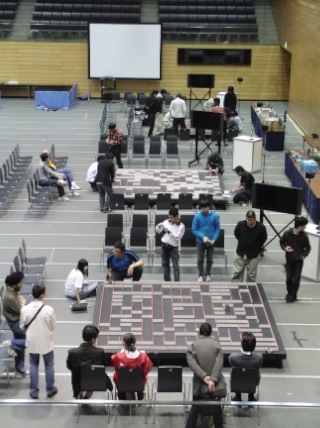 It didn’t take long to get Decimus adjusted to the maze walls. The Japanese walls are made of formica laminated material and have quite matt surface so specular reflection was not as much of an issue as it had been in Taiwan. As soon as the mouse appeared to be running reliably, I decided to leave it alone It can be a dangerous thing to tinker too much at the last minute. It is always tempting to tweak this and that but, unless there is a clear problem, I think they are best left.

Once I was set up, I took a good look at some of the other entries. the half-size contest looked like it was going to be really interesting. With this category started only two years ago, the builders of these tiny mice seem to have made impressive progress. My eye was caught by a perfect miniature replica of the famous six-wheel mouse built by Itani. When I first saw the original, I marvelled at the engineering required to get that mouse built and here were a couple of half-size clones. It is hard to get a real impression of scale from the photo but consider that the red battery connector is a standard two-pin JST connector. 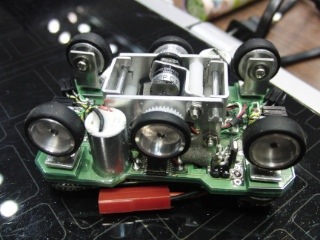 Kato also had an impressive looking, tiny mouse. All the others were an approximation to half-size. Kato’s design was the real thing at only 58mm long and 38mm wide. It didn’t sacrifice anything in the way of speed though and has a claimed performance of 6.5m/s/s acceleration. From what I could see, it was going to be the fastest entry in this class. 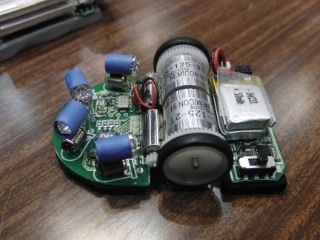 The mouse that attracted a lot of attention was also built by Kato. This is an unusual mouse in that it has four driving wheels in a configuration that looks like it could not work. However, it clearly does. It is very fast and I think everyone who saw it expected it to provide Beng Kiat with some really stiff competition. 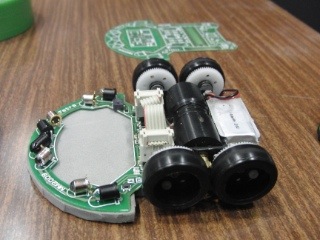 With everything squared away and the mice set up for the qualifying session the next day, the five of us dropped our kit off at the hotel and set off for some dinner. By tradition, I am told, this had to be Indian food and we walked out to a restaurant the guys had used on previous trips. It felt a bit odd having Indian food in Japan but, since the whole trip was a bit unreal for me, I decided to just enjoy whatever came my way. We had a very enjoyable meal and retired early to get a good night’s sleep before the qualifiers. You can guess how well that worked out…

2 thoughts on “All Japan Micromouse 2009 Saturday”