Friday is practice day at the All Japan Micromouse Contest. Held this year at the Shibaura Institute of Technology, Toyosu campus in Tokyo, this is the big event for micromouse and line following robot builders.

On the Friday, the organisers and helpers get the venue set up. This is a big undertaking which requires a small army of volunteers. They start some time in the morning and generally hope to have practice facilities open for the contestants some time after lunch. The venue than normally stays open until about 6pm while the rest of the facilities are made ready. It really is quite a sophisticated operation with the mazes, timing gear, two-way radio nets, computer networks, display devices, printing and copying facilities and competitors pits all having to be got ready.

Before all that though, there was a morning to use up. Breakfast at the Ginza Capital Hotel is a choice between Western and Japanese. Both are a fixed item offering. The Western breakfast is a couple of fried eggs, sausage/bacon/ham depending on the day, toast, juice, coffee and salad. Yes, salad. The Japanese breakfast is a tray of various items, most of which I cannot name. It is good though. The only obvious difference on a day to day basis was the choice of fish. 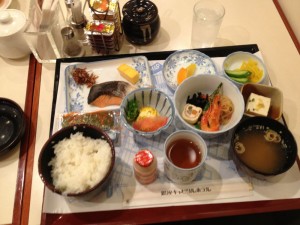 The room did not come with breakfast included but you can get a discounted breakfast voucher if you buy it the day before. At 1,000 Yen with the discount, it is not cheap but it is convenient and much more civilised than hunting around for food in the early hours. Or having to do the 40 minute walk without food or coffee. Speaking of which, the room only had a couple of packets of green tea and an impossibly small cup. Now, I like green tea but I like coffee better. Fortunately, many of the convenience stores sell packs of filter coffee that sit on a little cardboard stand on your cup and do a pretty good job of providing the vital black fuel just when you need it most. These convenience stores are very common. You can hardly walk more than a couple of hundred yards without seeing one. They all carry the essentials of life – toiletries, batteries, coffee, drinks, ice cream and many kinds of ready-to-eat food from pastries to bento boxes and the prices are generally reasonable.

Dave had some work to do on his line follower in the morning and I could do nothing until the mouse got into the maze so I had another half day to use up. Originally  I had planned to get up and visit the nearby, famous  fish market at Tsukiji. It was very close and I was, as expected, awake at 4AM so I had plenty of opportunity. When the time came though, the prospect of wandering out onto the streets at 5AM seemed strangely less appealing so I gave it a miss and played with my mouse code instead. After breakfast though, Dave went back to work on his mouse and I set out. It had crossed my mind to visit the Ginza shopping district to look on in wonder at the most expensive properties and high-end stores to be found anywhere. Then my inner geek told me to be more sensible and visit Akihabara. Like I was ever going to do anything else.

Soon I was back in territory that was becoming familiar. I had, though, forgotten my map of where the interesting shops were so I was reduced to wandering about. By chance, I did find the Vstone store. This is one of the great robot shops in the area and worth a visit any time. Here I found a line follower robot based upon the LPC1341 ARM processor. You can see the details here. The page is in Japanese so let Google translate have its wicked way with it.

Lunchtime soon came and we made our way down to the contest venue. They were not yet ready for us so we made use of the nearby McDonalds for lunch. Strange choice perhaps but it was handy and I was curious to know if there were any difference between the Japanse Big Mac and the English one. Not as far as I could tell.

The layout of the venue was a bit of a surprise. The contests took place in a long room of a wide corridor. There was room for all the events in one place but no obvious place to set up our gear and tinker with the mice. It turned out that the pits area was in an adjacent block, four floors up. This was in two classrooms with plenty of desk space and power. In the corridor outside were two practice tracks for line followers. 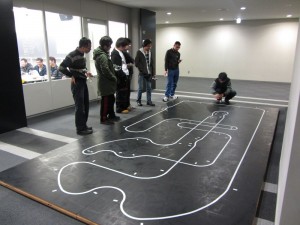 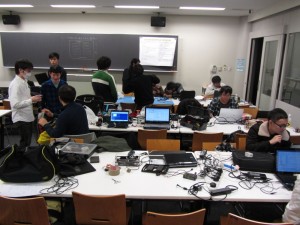 While this was all very well for the line followers, there was no sign of a maze without going all the way downstairs and into the next block. Luckily for me, I was told of a half size classic maze on the floor above that had been laid out for the freshman contestants who were in another classroom up there. This proved to be relatively lightly used and was my test area for the weekend. Almost nobody else seemed to know it was there.

During the course of all this practice, I discovered that Decimus 2D (D2D) had a fatal flaw in its search. The last week had been spent working hard on the speed runs. I had a high level of confidence that I could get in some good times with my greatly improved running. Unfortunately, I had overlooked the search phase as it had always gone reasonably well. Note the past tense. Now, the mouse would enter some cell configurations and suddenly dive off to one side. It became apparent that this would be likely (but not certain) to happen whenever it went into a cell with no side walls. I worked on this all afternoon and could not find the problem. This was getting serious. In the end, there was nothing for it but another meal at the Indian Restaurant and resigning myself to a night of debugging with no means to reproduce the error.

What actually happened was that I fell asleep pretty much as soon as I got back to the hotel. Woke up at 1AM just long enough to take off (most of) my clothes and then crashed out again until 6AM