On little more than a promise, robot builders gathered once more at Birmingham City University for the autumn contest known as Robofest. It was good to see some new faces and significant progress from a number of more established builders.

As usual, I don’t have the schools results but there seemed to be some significant competition involved at the other end of the room so perhaps we can get an update on that soon.

The wall following event has been a long term part of the overall contest and forms an excellent basis for the budding builder of maze solvers. After all, following a wall to the centre of a suitably configured maze is a significant subset of the tasks needed for a full solver. If your robot can tell when it gets to the goal then it probably has almost everything needed.

For many years, I have seen these robots develop. Many of them are never intended to be solvers and they enter just for the one event. I have not entered any of my mice because, I arrogantly thought, it would be unfair to enter a full-blown, fast solver in a lesser contest.

According to Wikipedia, when hubris offends the Gods of ancient Greece, it is usually punished. Certainly, I was in for a bit of a surprise. Several other entrants egged me on expecting, as did I, to see the normal wall followers thoroughly put in their place. So I entered this year. The result was a lot closer than I imagined: 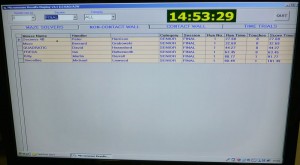 Bernard Grabowski’s Muso really did dash around the maze. I was really impressed with how fast it could corner. Decimus lost a fair bit of time simply turning around in dead ends since it stops to re-align each time. Muso lost time correcting its position relative to the wall because, while it was quick enough, the path taken was not really straight enough. Once Bernard gets the steering control a little more stable, it will get around as fast as Decimus. Anyway – the challenge is now on.

With the All Japan contest only one week away, I was very keen to see how Decimus could perform in a full size maze. Having changed the floodfill algorithm and discovered two major bugs in the last week, the outcome was anything but certain.

The heats went pretty well and I was reasonably happy. The steering controller is wound up a bit tight and shows a certain amount of oscillatory behaviour but not quite enough to make me desperate to re-tune it. Worse was a recurring tendency to miss the turning point for corners. InTaiwan, I had to make significant adjustments and they did not seem to suit the UK maze. This is odd but I did not want to make too many changes because the Japan maze will be different again and there may be very little chance for practice if the setup is anything like last year.

The results were fine though and I was happy enough: 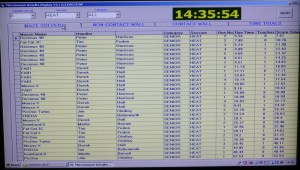 No room for complacency though since Derek Hall’s FAB1 and Tim Foden’s Fat Cat 3C are clearly snapping at my heels.

Since we run the finals in reverse order of the heat results, I was last to run and reasonably confident. Remember that thing about hubris? Decimus performed a lovely search, got to the middle and then threw a little fit at the entrance to the goal and crashed. It is not at all clear why that should happen although there is clearly a risk from the gate sensors as you go past. The crash walled in the maze and I had to restart completely. If this had been the Japan contest, it would have cost me three runs. One for the original search, one when I tried a speed run and discovered the maze was corrupt and another for the second search. There is little margin for error in Japan. Still, I would have had two possible chances to get a good score.

Under the UK rules, an error like this will simply put you out of the running. The search time penalty means that, if you don’t get a good search and first speed run, it is almost impossible to get a good score. As it turned out, I came third behind Tim and Derek who both had good runs and came within a quarter of a second of each other in the final scores/ 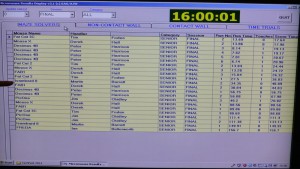 The fastest run by Decimus was enough to keep me fairly happy though. 6.75 seconds over a 64 cell route is respectable enough by any standard. The maze took a lot of searching and had only one moderately twisty path. Not everyone took that path but the alternatives were significantly longer. 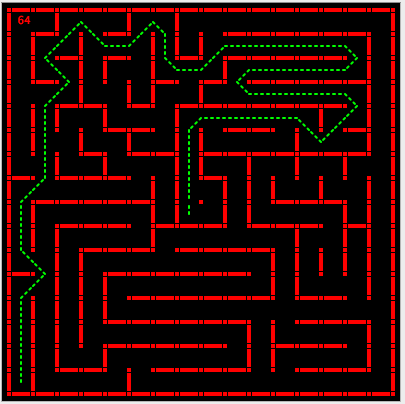 For the time trials, there were only ‘smart’ entries. That is to say, no robots that simply slid off the walls. Somehow, I am never really prepared for this, always wondering how I left the code and what speed it would run at. What it did was remarkably consistent. The reason was clear enough when I got home – I had commented out the code that makes it run faster on each lap. Never mind, it was a good time anyway. 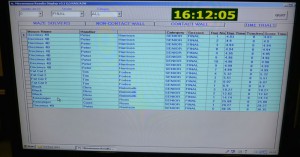 I have to keep an eye on Fat Cat 2 though. He did remember to speed up on each lap and was getting close to catching me.

Thanks again to all those at Birmingham City University who organised everything, set up and took down all the gear.