This year’s UK micromouse contest was, once again, a part of Birmingham City University’s Techfest event held in the Curzon Building, Birmingham on June 24th. With a larger than usual number of local entries, it was quite a busy day.

Techfest hosts a number of contest and the schools events were very well attended with some great robots and performances. You can read more about that here. If you are one of the 2 billion users of Facebook, you can find lots of pictures here – https://www.facebook.com/MicromouseLineFollowerAutonomousRobots/.

For my part, the day is all about the micromouse contest. This year, I ran the latest version of the Decimus 4  hardware. It is named Decimus 5 alpha here because it is carrying all the software I hope to put into the next mouse. The curious naming reflects the desire to test new code on proven hardware rather than as is often the case, having everything new together. The hope is that it will be easier to debug changes. We shall see.

As it turned out, some kind of fatal bug appeared in the code changes since running in Portugal a month back. Fortunately, I have relatively good source control management with git and t was easy enough to check out an older version and run that. This was a little disappointing since I had a new solver/pathfinder and it should have been able to find significantly better routes than the old one.

No plan survives contact with the enemy and the maze for the heats would not have benefitted from the new pathfinder in any case so that was all OK in the end. The heats maze was very long and, while there were two routes, it only had one practical path: 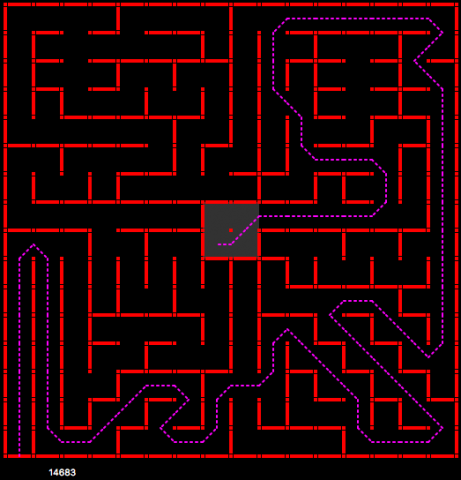 Exploration of this maze took quite a while and the chosen path, at 14.6m was a bit longer than average but quite reasonable.

Clearly, the mazes were going to be long and the risk is that the micromouse has very dirty tyres by the time it gets back to the start after the search phase for its speed run. So, over lunch, I decided to reduce the first fast run time by a lot. More than I would like but not crashing out is very important.

The finals maze was a modification of the heats maze: 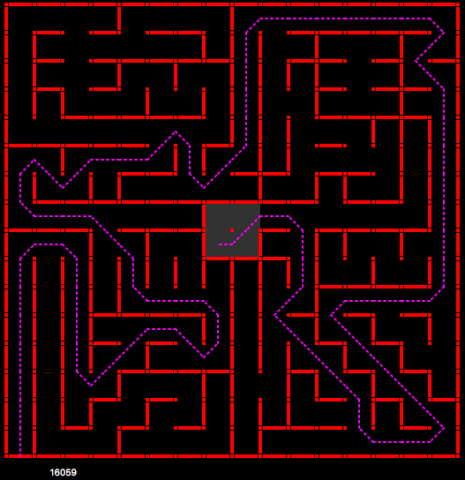 This time there was only one practical route and it was quite long at 16m. A typical route is about 11m. Searching would once again be a challenge as the mouse was likely to spend time in areas that could never be part of the route. Hopefully, the decision to slow down the first speed run would pay off.

Well, here are the results:

It still crashed but this time, less time was lost and the run was significantly faster than that of FAB1 so it all worked out OK in the end. Having started off slowly, it took 6 speed runs before Decimus found its crash speed and managed a sub 10 second run. Pretty respectable in this maze I think.

The Time Trials is the name we give to a simple run all the way around the outside of the maze. All walls, It is a basic test of performance. Decimus has been fairly dominant lately but there are worrying signs that lead may not last:

Not everyone wants to risk their micromouse in this event since a crash is often as very high speed.  Purely mechanical runners have had their day now. I need to find out where Fat Cat 3C it performing best. Is it faster on the straights or can it corner faster?

A perennial favourite and a useful step in the way to a full maze solving micromouse is the wall follower event. The mouse has only to follow the left wall to find its way to the goal. On a whim, I entered Decimus after seeing that some wall followers looked to be faster. Decimus is reasonably quick but it must not make any errors during a search so it is also fairly careful and that limits performance. Anyway, I wanted to see how well it would do.

On this occasion I need not have worried but I have seen some much faster schools entries so work still needs to be done.

Thanks again to Chris Evans, Tony Wilcox and all the crew at Birmingham City University for making the day possible.