APEC is done. Once again, I boarded a plane to the United States to brave the trials and tribulations of a long weekend suffering in the warm sunshine of Florida. It is tough going compared to my normal climate in Anglesey but we must all suffer for our art. And I managed third place. My best result ever. 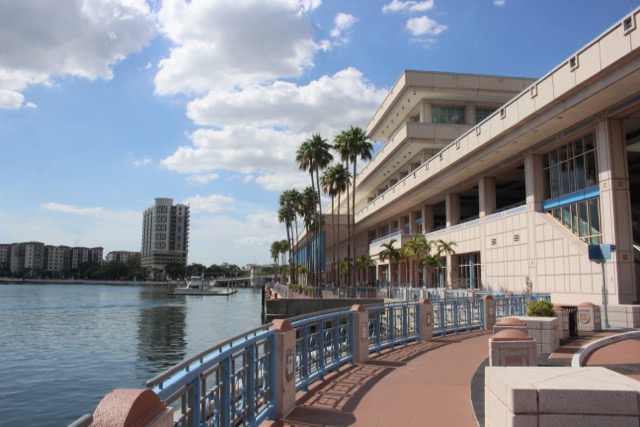 Cash prizes were awarded again this year. Diu-Gow 4 received US$500 for first place, US$500 for the best student entry, and US$150 for the fastest run. Hippo C received US$250 for second place. Decimus 5α received US$125 for third place.

Scores for All Completed Runs of each Mouse

The contest was held on Monday night after the exposition so that everyone at the conference could attend. New this year, stadium seating to handle about 200 attendees was located on either side of the maze. The traditional aerial view of the maze was projected on a large screen behind the judge’s table. The scoring system superimposed the timing information on the overhead view of the maze, so that everyone could see it in real time. The contest venue was located in the exhibit hall very near to the exhibits, making it easy for attendees to migrate over to the contest when the exhibits closed. The picture below shows the venue as the contest was just getting under way. The contest was run on a maze imported from Korea.

Gerardo Molina prepared the maze design once again. APEC has developed a reputation for very difficult and long maze designs. This year’s design had two main paths to the center. The green path plus the red path was 108 squares. Most mice took this path. The green path plus the blue path was 109 squares. Two mice took this path, including the winner.

Diu-Gow 4 was designed and built by Xin-Han Cai in 2015. He is currently a graduate student at Lunghwa University of Science and Technology in Taiwan, working on a master’s degree. Diu-Gow 4 is equipped with a vacuum fan, made by a 3D printer, to prevent skidding in high-speed turns. Because of the vacuum fan, Diu-Gow 4 turns about 25 percent faster than his previous micromouse Diu-Gow. Diu- Gow 4 won first place in the All Japan micromouse contest in 2015, 2016. Jiu-Hung Hung is a partner of Xin-Han Cai.

Hippo C was designed and built by Huan-Jie Liao in 2016. He is currently a graduate student at Lunghwa University of Science and Technology. Hippo C is equipped with a vacuum fan to increase friction while turning. The fan and fan body were made by a CNC machine. A boost switching power circuit is used to provide a stable voltage input to the DC motors. Yu-Chih Lin is a partner of Huan-Jie Liao. Hippo C came in second at the APEC micromouse contest in 2016.

Technical information for the Lunghwa University of Science and Technology entries

Decimus 5α is a classic (full size) micromouse by Peter Harrison from the UK. Using the common four-wheel drive layout, this revision has a top speed in excess of 5m/s. The use of 3D printed parts has greatly simplified the mechanical design and construction of this mouse. Sensor alignment in particular is much easier with IR absorbing, 3D printed mounts. Decimus 5α has demonstrated repeatable turns at nearly 2g of centripetal acceleration and straight-line accelerations of up to 15m/s2. The ARM cortex M4 processor is an STM32F407 with 1Mbyte of flash and 192kbyte RAM. Running at 144MHz, it performs all the navigation, solver and control functions using floating point throughout while still only taking up less than 10% of the available processor power. Improvements to the searching and pathfinder algorithms attempt to find the most effective route by taking into account the mouse dynamics and the need to search as fast as possible. A comprehensive software re-write is under way which, it is hoped, will improve reliability and turning performance as well as paving the way for a port to new hardware.

Zeetah VII was designed and built by Pierre Hollis and Harjit Singh. The idea behind this mouse was to see how light we can make it. The mouse weighs in at 44 g. It uses an STM32F411 CPU with 512kB flash and 128kB of RAM, has 16MB of flash for logging, AD22425 analog gyro along with a BMX055 accelerometer/gyro (to compare the gyros), a 128×32 OLED display and 512 count encoders on the wheel. Power comes from two LiPo 70 mAh cells. The motors are MicroMo 1024S. The mouse measures 84mm x 74mm.

EduMouse was designed by Juing-Huei Su and Chao-Wei Chen for educational and experimental purposes. It uses observer-based sensor fusion algorithms to improve the encoder resolutions.
All the Taiwan teams are from the Embedded Control System Laboratory of the Department of Electronic Engineering at Lunghwa University of Science and Technology, which is organized and led by Professor Juing-Huei Su.

Exia Repair II has 6 infrared sensors and a suction fan which is made with a 3D printer. This allows it to be more stable in a fast run. The suction fan can create 270g of force with 50% output. I have not measured it at maximum output. Exia has some new features which it did not have at MM2016 in Japan.
1. It is able to accelerate in known sections of the maze during searching.
2. It has a much faster algorithm to determine the route.

Patience 1C is the first micromouse from Robert Scheer. As a newbie, the goals for this project were limited to basic functionality using simplification of fundamentals. Motto for this project is “A little Patience goes a long way.” The format is 2-wheel, classic size. Wheel & motor mounts are CNC milled 7075AL. Fixed wheel shafts are CNC turned 7075AL. Wheel rims are CNC milled Acetal. Wheel bearings are off-the-shelf Acetal gear hubs rotating on aluminum, ie without ball-bearings. Search and speed-run speed is 0.8m/s, while accel/decel is 7m/s2. Turns are limited to left and right 90deg pivot turns.

Brain is designed and built by students in the Robotics and Automation Society at the University of Pittsburgh. All components are mounted to a custom-designed PCB measuring 8cm by 10cm. The Brain uses a Teensy 3.2 development board, which includes an ARM Cortex M4 CPU running at 144MHz with 64kB RAM and 256kB flash. A mass of 140g is driven by four independent wheels. For control, the Brain utilizes a gyro, encoders on each motor, and four IR phototransistors. The hardware has demonstrated accelerations and velocities in excess of 12m/s2 and 3m/s, but software control is limited to more modest speeds. The language is C++, and the build system is Teensyduino.

FAB 1 parodies the Thunderbird’s pink Rolls Royce. It uses a STM32 processor running at 72 MHZ with 96k of RAM. It has 6 TSL262R sensors and 100mAh LiPo batteries. The total weight of 100g is driven by six powered wheels, allowing the mouse to accelerate and decelerate at much higher speeds. The two centre wheels are mounted 0.5mm lower than the others, allowing uncompromised high speed cornering. It measures 115mm(L) x 75mm(W) x 22mm(H).

My thanks to David Otten, the contest organiser, for the preceding text and results. His full report can be downloaded here: APEC2017Report

The maze had two principal routes. 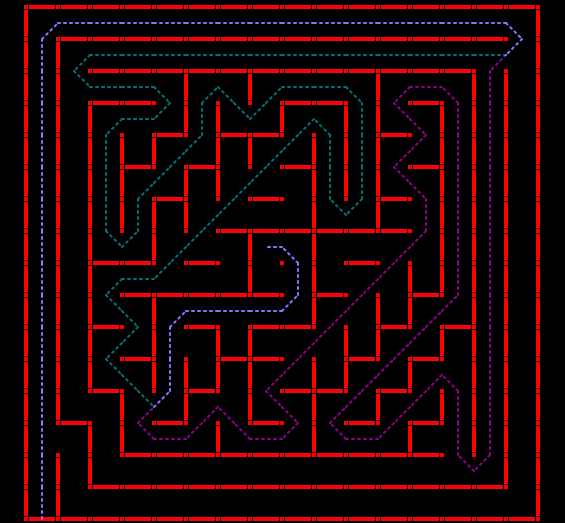 The green path was arguably the better choice as well as being a little shorter and yet the winning mouse took the magenta path. My mouse also took that path which was a little surprising. It would not have made a significant difference to the run time but the longer diagonal is more dangerous on the magenta path than it is on the green path because of the wall orientation.

Overall, the contest demonstrated once again the huge advantage to be gained from having a fan to create a partial vacuum under the mouse and increase the downforce during the turns.

Green Ye has a web page with further details: http://micromouseusa.com/?p=2103