The All Japan micromouse contest attracts a large number of participants. This year, the expert class has an entry list of 84 and there are 99 entries in the freshman class. With so many mice to run, Saturday is needed to thin the field and select the best contestants for the finals on Sunday….

Since the venue can get pretty crowded with so may entries, we decided to get there early and beat the rush to a good workspace. Too early, as it turned out, but we did get a good table right by the small practice maze. Last minute tuning and tweaking was the order of the day all around. I had done some work overnight to eliminate a couple of problems discovered on Friday. Things were not quite right but is was difficult to find anything that was actually wrong so that left me without a good plan for improving performance.

Harjit Singh, was a study in concentration, adjusting this feature and that parameter to satisfy himself that his mouse could give of its best. Dave Otten had, I believe, made one significant change and was apparently satisfied that he was ready.

The freshman class is open to any mouse builder that has not competed before and, with so many of them to run, the qualifying event was held in the morning with four mice running simultaneously in identical mazes in the corners of a standard maze. For the freshmen, the finals would be held that afternoon.

Classic and half size qualifiers ran all through the day. A single half-size maze was used for the 33 entries in that category. As with the classic event, a number of places in the final are pre-allocated to regional winner which means that not all finalists are seen running. It was pretty clear that there was going to be some stiff competition this year with Hirokazu Kojima posting a very impressive time of 3.037 seconds giving him first place in the half-size micromouse qualifying. At the Chubu branch competition last month, his time was only 0.1 seconds slower than than of Kato-san’s moue, egg-torte, with their closest competition taking twice as long. Today, he had beaten Kato-san by more than 0.25 seconds. Clearly, tomorrow’s half-size event promises some serious competition. 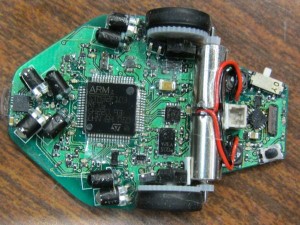 The classic contest qualifiers are held on two mazes simultaneously. With each contestant having up to 7 minutes, it takes all day to get through the entries and a certain skill is needed to both run a mouse and get to see all the potentially interesting contestants. Several contestants bring 2 mice and for some, like Singapore’s Ng Beng Kiat it must be a busy day as he had two classic mice, a half-size mouse and a line-follower to run.

Out of the 84 initial entries, around the top 20-25 are chosen for the finals the following day. They are joined by 9 regional winners who are pre-qualified. Since there is no combined display of times available until all is done, it can be a bit nerve-wracking trying to work out if  you have qualified. Every time a faster mouse appears, your chances diminish but it is impossible to be sure unless you are at the head of the field. Contestants with more than one mouse entered are only able to take one through to the final, although they are able to choose which one – it need not be the one that actually ran fastest. This year, six mice posted times under 5 seconds. Six more had times in the range 5-6 seconds so competition was tough. of some special interest was Kojimouse 7CL. This is essentially the same mouse platform that Kojima-san ran in the half-size contest but with slightly different sensors to enable it to see the walls in the classic contest. He managed a time of 5.288 seconds.

David Otten had two good runs with his mice, gaining times of 8.691 seconds and 9.364 seconds. Harjit Singh managed 10.850 seconds with Zeetah V built by him and Pierre hollis, who was unable to attend. Unfortunately, my misgivings over Decimus 2A were well founded and the beast failed to find the centre of the maze. In the end though, both David Otten and Harjit Singh had times that were comfortably fast enough to gain them a place in the final.